Controversy comes in all walks of life. In sports and entertainment, controversy is often manufactured in order to provide publicity for whatever it is that's being sold. In wrestling, the ultimate blur of fantasy and reality, one man can always be counted on to bring 100% true controversy to the table. That man is the one and only Jim Cornette.

While that 11-letter "c" word has described Jim throughout his career, it's the managing prowess of "The Louisville Slugger" that originally burnt the name Cornette into the conscious of wrestling fans the world over.

Although he managed such stars as Sherri Martel, Adrian Street, Yokozuna, and Owen Hart throughout his career, Cornette will be forever linked to Dennis Condrey, Bobby Eaton, and Stan Lane--The Midnight Express.

Between their innovation, hard work, and obvious love of their craft, Cornette and the Express should automatically dominate any wrestling fan's thoughts of 1980's tag team wrestling. 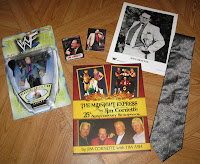 In late 2008, Cornette and The Midnight Express celebrated their 25th anniversary as a unit. In addition to still making various appearances at events up and down the east coast with the Express, Cornette decided to compile a magazine highlighting the unit's incredible run. The magazine idea eventually morphed into The Midnight Express & Jim Cornette 25th Anniversary Scrapbook.

First offered online and at any fanfest or convention appearance that Jim made, the book was highly anticipated by fans from the moment that it was announced. While this can't be said about most books, the anticipation was far exceeded by simply thumbing through the 230-page softcover publication.

At this past August's NWA Fanfest, I finally picked up my copy of the book from Jim and his wife Stacey (Ohio Valley Wrestling's Synn) at their booth. Among authentic ring-worn items, rare 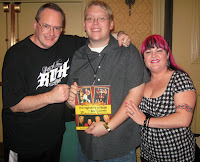 programs, and even cancelled Smoky Mountain Wrestling paychecks, the book is still by far the centerpiece of Cornette's offerings.

The book combines the idea of a traditional scrapbook, a record book, and inside stories that you could only get from the man who lived it all.

The bulk of the book is set in a nearly complete record of every Midnight Express match from 1983 to their last national run in 1990. I should probably use the word "move" instead of "match," as even personal appearances, downtime, and vacations are documented thanks to Cornette's own records. Stories ranging from short anecdotes to full blown sagas are interspersed into this timeline, placing you into both the time period and mindsets of Cornette, Condrey, Eaton, and Lane.

a history of 1980's Jim Crockett Promotions and early WCW. Due to the Express' 7 year run in the NWA, their high level placement in that era of the business, and Cornette's impeccable documentation and memories, the book should almost be called "The Midnight Express, Jim Cornette, & 1980s NWA Scrapbook."

Remember controversy? That thing that Cornette always seems to be connected with? There's some of that in here, too. Political battles, lawsuits, and death threats are just some of the stories included, all told in Jim's unmatched storytelling style.

To my knowledge, a more complete capsule has not been written about any star or entity in the wrestling business. In fact, there's only one question about Cornette that will remain with you after reading: Why has he not written his own personal career book?

Well...maybe two questions. Does Cornette create the controversy or does it simply follow the tennis racket wherever it goes? You decide.

To get your own autographed copy of the book and many other great items, you can check out both http://www.jimcornette.com/ and http://www.cornettescollectibles.com/.
Posted by J\/\/ at 11:05 PM