Makeup...Skirts...You'd Think I Was Reviewing Barbie...

This "doll" doesn't drive a Ferrari. 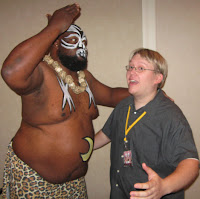 prefer, it makes no difference in the end. Kamala was, and still is, one of the most imposing gimmicks in the history of pro wrestling. How else could you describe a man well over 6 feet tall with a tribal mask, shield, spear, makeup, and who is also limber enough to jump in the air, nearly do a split, and touch his toes? A human cougar.

No, not that kind of cougar.

Dreamt up by Jerry Lawler and Jerry Jarrett to be introduced into their Memphis wrestling promotion, Kamala went far and beyond what could have been a simple, one-dimensional gimmick.

Lawler. Hogan. Magnum. Undertaker. Andre. The Von Erichs. Kamala warred with them all and is still going strong on the indy circuit, and in the occasionally "big league" appearance, to this day.

It's not surprising that a wrestler with such a colorful character and amazing shelf life would still have new merchandise nearly thirty years after debuting. 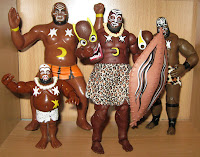 In the second series of Mattel's WWE Legends line, Kamala receives the action figure treatment yet again. How does this rendition of the belly-slapping cannibal match up to previous incarnations?

Kamala has had four previous figures from the LJN WWF line, the Hasbro WWF line, the Figures Inc. Legends of Professional Wrestling line (not pictured), and the Jakks WWE Classic Superstar line. Each had positives and negatives with the new Mattel figure being no exception.

I've been somewhat critical of the new Mattel WWE figures, as I simply haven't warmed up to them yet as many have. Between the regular line and the Legends, they all seem to feel a bit thin to me. While this may be more realistic, a wrestling figure should always be a bit larger than life.

Starting with the positives, the facial likeness is second to none and easily the best a Kamala

figure has ever seen. It matches perfectly to the drawing (copied directly from a widely seen WWF photo) featured on the card and is done in an expression we're all used to seeing from Kamala.

Another plus is the accessories. While no Kamala figure has yet had his spear, Mattel has included his tribal mask (previously only produced by Jakks) as well as his necklace and shield. Only the Hasbro Kamala figure previously included the necklace which was not removable in that version.

The accessories are spot on, and the shield is based off of Kamala's 1992-1993 WWF run. The WWF's prop department either created or purchased the shield originally for Tony Atlas' brief 1990-1991 run as Saba Simba. For anyone who was ever interested in creating a custom action figure of Saba Simba, this figure is a must have.

Another interesting feature regarding accessories is the skirt. While the skirt is cloth, it is actually attached to the figure between the torso and waist. This ensures children (or those hiding in their basement "arena") that Kamala's skirt will not come off in play, thus exposing his black underwear.

The height is perfect on the figure, however the weight could use some work. While the torso is thick, it simply isn't thick enough. There even seems to be a hint of abs present. Weight on the arms could use some work as well. Kamala's looking just a bit buff.

Posing these Mattel figures always seems a bit difficult. While Jakks often had joints that were a bit loose at times, the Mattel joints seem a bit stiff. The joint that truly bothers me, and seems to be becoming an industry standard, is the midsection joint of the torso. This joint was never a factor in my childhood toys and I will never see the point of it. I cannot see how it would help kids play with the figure nor even pose it.

Bottom line? It's a nice figure and one that's definitely worth picking up. It has issues (abs) but it 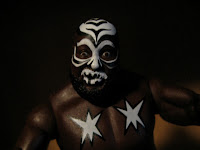 also has the best facial likeness and accessories of any Kamala figure ever released.

The entire second series of Mattel WWE Legends also includes Terry Funk, Jimmy Snuka, Iron Sheik, Jake Roberts, and Rick Rude. If you enjoyed this review, drop me a line at any of the social networking links below, or on here, and I may do a similar one with another figure from the series.

Excellent review.
I once was lead to believe Kamala was at an event. It turns out it was "Kamala Jr" (although not really related, of course). To make it worse, Kamala Jr. was about 5'8". Not much of a Ugandan Giant.