What's George's Is Mine, & Mine Can Be Yours, Too! 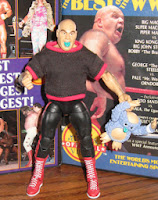 "You know that George 'The Animal' Steele is really a teacher, right?"

Surely I'm not the only one who heard that sentence time and time again growing up. Somehow, George Steele's career in academics was a well-known fact amongst children of the '80s and '90s. Maybe it was because the truth differed so much from the character we all knew and love.

George wasn't always an "Animal," though. Steele's original character was actually more of a beatnik, using phrases such as "Daddy-o" to punctuate his promos. Battling the likes of Bruno Sammartino and Gorilla Monsoon, George was a top of villain of the late '60s well into the 1970's. It was not until the 1980's "expansion" era that Steele became "The Animal" that so many of us know and love.

Although initially a Hulk Hogan nemesis managed by Mr. Fuji, George gained the love of millions shortly after the first WrestleMania and launched into his famous feud with Randy Savage. With the lovely Elizabeth overshadowing the Intercontinental Championship, Savage and Steele

Although the late '80s saw Steele's career wind down, The Animal still occasionally shows up to cause chaos and chew a turnbuckle pad. As one of the most unique characters to ever grace a wrestling ring, it's no surprise that George "The Animal" Steele has seen many different plastic incarnations.

The latest representation comes from Mattel in their WWE Legends line. With rumors running rampant that the line may soon be canceled amid veiled responses from Mattel, it would be a shame to see new merchandise of the forefathers of wrestling suddenly come to an end. Time

will only tell if figures from wrestling's past continue to grace shelves next to today's entertainers.

Nevertheless, Mattel has done an admirable job with their WWE Legends thus far. It's always a plus when character specific accessories are included and this George Steele figure fits that description to a "T."

As nice a figure as it is, the Jakks Classic Superstars George Steele disappointed many collectors. While there were two versions of that figure released (one with painted hair and one with glued "real" hair) it was something which went unreleased that crushed fans. That would be the cancellation of Mine. Not yours. Mine.

When the Jakks Steele figure was originally shown it was to include the first figure of Mine, George Steele's late 1980's stuffed friend. By the time that the figure hit shelves, Mine was replaced by a recycled club and turnbuckle pad. This did not sit well with fans who expected 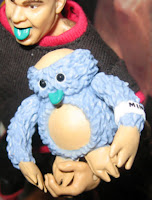 more from the company known for the amazing Classic Superstars line.

Mattel has come to the rescue by finally releasing Mine. The green tongued little fella even has articulated arms ready to grasp onto his larger buddy as well as his trademark wristband proclaiming his name proudly. Another great inclusion is that of Steele's red-trimmed black shirt. Designed with velcro, the shirt is easily removable. 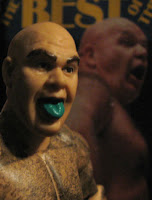 George's facial likeness is perfect with the green tongue hanging out as it should be. After all, who would want a Steele figure with the tongue in his mouth? George's infamous body hair is painted on and actually looks better than had it been flocked.

My personal "Public Enemy #1" in current wrestling action figures, the torso joint, is present but not bothersome. It actually helps improve on my only complaint of the figure. Like many Mattel WWE figures, George simply looks 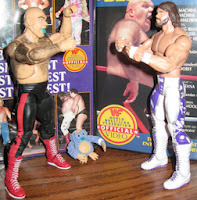 too thin to me. The torso joint actually adds a "roll" of sorts. Even in his early days battling Bruno, George was never that thin.

All in all, this is a very nice figure. The inclusion of Mine and the famous shirt actually make it an "ultimate" version of The Animal if that is something that you prefer as a collector. Although the "thin" factor is there, the long arms work well for George's famous stances.