It's very hard to fathom that a year has passed since the angle introducing Nexus began. The amazing momentum that got fans (including myself) talking may have fizzled out before the end of summer, but the fact that something as fun and relatively unique could still be done in this era of wrestling is reason enough to savor the memory.

One year later and figures of the original Nexus members are making their way into collections worldwide. Heath Slater (reviewed here) may have been the first, but the figure highlighted here today has the potential to be the most desired.

Although never a diehard indy wrestling fan, I know quality product when I see it. The closest I came to living and dying by the indy scene was following the IWC promotion here in Pittsburgh. For the better part of the last decade, IWC featured not only the biggest names available on the 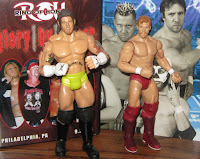 indy scene, but also hosted the hottest regional action to be found anywhere.

IWC allowed me to see stars such as CM Punk, Christopher Daniels, AJ Styles, and Samoa Joe live, in person, and in the beginning days of their careers. Seeing these wrestlers now getting magazine covers, trading cards, and action figures almost gives me my own sense of pride for them. Knowing how these stars earned their way into the 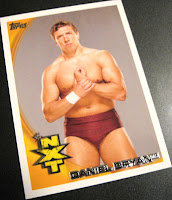 Where do the Nexus and the indy scene of the 2000s collide? Right at the feet of "American Dragon" Bryan Danielson. Or Daniel Bryan. Whichever name you prefer, the man has been deemed by many to be the greatest wrestler in the world. Finally, that man has an action figure.

Released as part of Mattel's WWE Basic Series 11, this figure will no doubt be one to grab as soon as you see it. Bryan's independent fans will want this figure just as much as 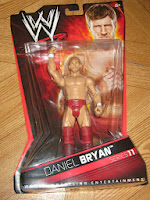 his current fans floating in the orbit of the WWE Universe do.

Bryan has always been known for letting his wrestling do the talking. Basic tights, boots, and pads. If you ask me, a wrestler like this would be harder to capture in figure form. There's less to work with and therefore far less to screw up. Mattel, by and large, hits the mark.

I've long been a Jakks apologist. I still feel that their reign with the WWF/WWE license will be hard to ever beat. Had a Bryan figure been produced by both companies I do believe that I would be choosing the

Mattel version. Being a relatively slight individual, Bryan is perfect for the slimmer design of the Mattel figures.

Although the torso does not appear to be original, it fits Bryan as do the arms and legs. While the facial likeness is extremely close, there's just something that's ever so slightly off. This could possibly be due to the hairstyle used. Coloring and design seems spot on. As I said earlier, there was much less to work with for Bryan to get the look down pat. Mattel has succeeded.

As I have in the past few Mattel reviews, I will again point out that the recent releases feel much less stiff in the joints than earlier offerings. Danielson, known for a wide array of holds and maneuvers, is ready to battle any monster, past or present, that the WWE is ready

to throw at him.

Mattel is on a nice and steady roll with releases. Product is full of quality and hitting shelves quickly. While the future of their Legends line still concerns me, Mattel's coverage of the current WWE scene has been top notch as of late. I once again give the highest recommendation to pick up this figure. It's the rookie figure of a competitor who has already guaranteed his inclusion in the wrestling 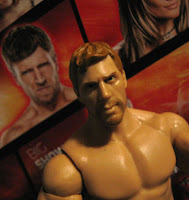 history books. He will always be remembered as the number one icon of the "Internet" era of wrestling fandom. If his WWE career goes through the roof (or the glass ceiling?) it will only build upon his previous accomplishments.