There's just something about pro wrestling that exudes patriotism here in the United States of America. Sgt. Slaughter leading the Pledge of Allegiance. Hacksaw Jim Duggan chanting (and 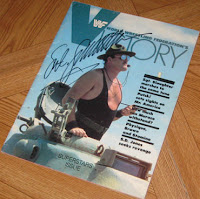 singing) the famous three letters. The pride (and vitamins) running through your veins while listening to "Real American."

Back in the "good ol' days" nothing was more American than packing up the family and friends, heading to the local venue, and enjoying a night of great wrestling action. Done at the right time in the 1980s, this could have meant attending a stop on the Great American Bash tour.

Twenty-four years ago today saw the Great American Bash tour host the very first War Games match in Atlanta, GA. Pitting two teams of five, War Games was both brutal and innovative. One huge cage. Two rings. Ten men. Although many great War Games matches have been held since, the original is still the best. The battle captured exactly why pro wrestling was loved by blue collar America. 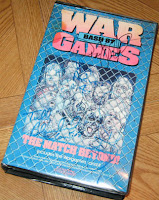 Blood, guts, brute strength, and the hard working common men (Rhodes, Road Warriors, Nikita) against the uppity showboat athletes (The Four Horsemen). It just doesn't get any better than that.

Some wrestlers carried their patriotic message far beyond the Fourth of July. Certainly Slaughter, Duggan, and Hogan would leap to mind as far as characters bleeding the red, white, and blue. Perhaps no one wore the 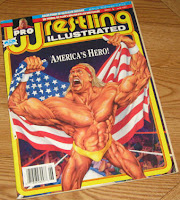 countries' colors better than Del Wilkes, aka The Patriot. Be it in the GWF, WCW, or WWF, the masked star took a relatively dated gimmick and suddenly became relevant in a decade where the boundaries of good and evil were often blurred.

During his short WWF tenure, The Patriot had a particularly easy time capturing fan allegiance in his home country. In a sport known for its jingoistic showings, in 1997 a wrestling war began between the rather 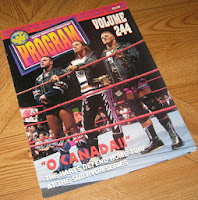 unlikely opponents of the United States and Canada. This conflict was ignited a star usually known for his universal appeal--Bret "The Hitman" Hart.

The Canadian Hart had recently reformed The Hart Foundation stable and in the midst of doing so began spouting anti-American rhetoric. The Patriot, new to the WWF scene, was able to capitalize on this and, until suffering a career-ending injury, became one of the WWF's top stars. One particular July evening in Pittsburgh on a live Monday Night Raw, The

Patriot even scored a pinfall over The Hitman leading to one of the Steel City's most memorable modern wrestling moments.

Even the biggest wrestling event of the year has had patriotic overtones. WrestleMania VII in 1991 (subtitled "Superstars & Stripes Forever") featuring the Los Angeles Sports Arena decked 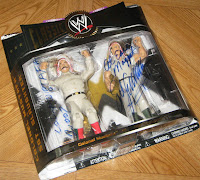 out in red, white, and blue to witness Hulk Hogan attempt to regain the WWF Championship from Sgt. Slaughter. Slaughter, in a storyline that stirs controversy to this day, had recently turned on his beloved United States and sided with Saddam Hussein's Iraq. Hogan disposed Slaughter in typical Hulkster fashion and became champion for the third time covered in a crimson mask while waving Old Glory. 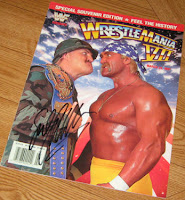 While many of us get patriotic feelings from the fictional battles recalled above, celebrating our freedom and remembering how we obtained that right is what it truly boils down to. For the better part of a decade, WWF/WWE has put on an annual holiday special for the U.S. Armed Forces entitled "Tribute to the Troops." Vince McMahon and many of his 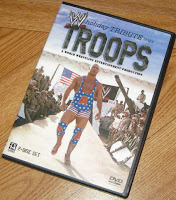 superstars have traveled overseas to visit with the troops and provide a bit of entertainment reminiscent of the ventures put forth by late comedian Bob Hope in years past. These events have provided much joy for the men and women in service and are a great example of the industry giving back.

Whether fireworks, barbeque, or just relaxing is on your list for today, have a great Independence Day...