CM Punk: Before The Collector's Cup

There's certainly been a buzz around the activities on Monday Night Raw over the past few weeks. It hasn't been the matches, which have remained relatively the same. Rather it's been the words and actions of someone that I've been on the bandwagon of all along: CM Punk.

Remember how Jesse Ventura would brag that he was on the "Macho" bandwagon since day one? That's how I've been with CM Punk. JW is to Punk what Ventura is to Savage. Hmm. Not exactly the same I guess, but it works for me!

In all seriousness, CM Punk was on the very first indy card that I ever attended. Back then, no one could've predicted that he would one day make it to WWE, become champion, and go on to be the hottest name in the company during the summer of 2011. That said, even ten years ago he was a great young wrestler and very entertaining to boot.

There's speculation going every which way as to just how "real" Punk's threats of leaving the WWE are. It's been widely discussed that his contract with the company is indeed up, although at this point it seems very odd that the WWE would be putting this much emphasis on a man who is planning on abandoning the company in a few short weeks.

After last week, my vote would be to do a classic double turn. Many fans have been asking for a Cena heel turn for years. The alleged reasoning for holding back on this twist was reported as the company not wanting to give up the huge merchandising cash cow that Cena provides as the classic "good guy." If reports of Punk's merchandise completely selling out at this past Monday's Raw are true, the WWE just may have found their replacement.

Cena is the perfect corporate champion. How about Cena siding with Vince against Punk who would represent how the fans truly feel? The WWE has been wanting to recapture the Austin-Rock dynamic for a decade now. I see the answers standing in their very ring.

Regardless of how the Punk buzz turns out, the "Second City Saint" has had some nice memorabilia over the years--collectors cup and ice cream bar aside! 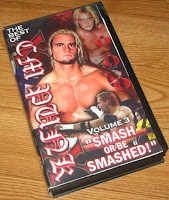 For those of you who haven't attended an independent show, it is not uncommon for the wrestlers on the card to peddle their own wares. The "gimmick table" where fans can buy photos, autographs, and other merchandise is a staple that not only pleases the fans but helps the often struggling young stars monetarily as well.

Punk was no different and in fact often had some of the nicer indy merchandise out there. Shirts, promotional photos, and even video tapes showing the "Straight Edge Superstar" against such stars as Low Ki, Colt Cabana, Rey Mysterio, and even Eddy Guerrero. I was fortunate enough to sit ringside for a Punk-Guerrero match that was held shortly after Guerrero's 2003 WWE return. Although the match was excellent, one of the best matches I've ever had the pleasure of watching live was between Punk and "Fallen Angel" Christopher Daniels. This match, held on 9/28/02, was an iron man 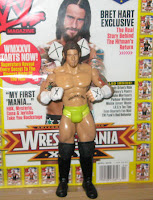 match and is worth tracking down for tape collectors and fans of both stars.

I've mentioned before that it honestly makes me a bit proud to see these young men, who I saw beginning their careers, not only make it to the "big time" but also see perks of immortality such as magazine covers and action figures. The very first CM Punk figure is still one of my favorites. Although many Punk figures have been released by 2011, the very first version is still the best. Produced by Jakks in 2007 for the WWE ECW line, this figure is the only one to feature the most realistic tattoo designs. Although the Pepsi and Cobra (G.I. Joe enemy) logos aren't perfect due to copyright, they ARE present unlike the rest of the Punk figures produced. 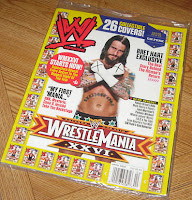 Punk also particularly shines in the merchandise aspect on the cover of the April 2010 WWE Magazine. Truthfully, the magazine has 26 different covers in all to celebrate WrestleMania XXVI, but the Punk cover is one of the best of the lot.

How about the best CM Punk collectible of all? Until the ice cream bar is produced, I have to be biased and go with a one-of-a-kind item. From ringside at an IWC event on 1/25/03, I snapped a photo that was caught out of pure luck. Punk is flying out of the ring towards his opponent then-IWC Heavyweight Champion Jimmy Vegas...and me! Although Punk

did not win the match, he did sign the photo a few months later for me.

The sky is the limit for CM Punk. Although he is a veteran by now, I don't think that we have seen the best from this man.

After last Monday Night, I think we may even be seeing that ice cream bar and collectors cup...
Posted by J\/\/ at 7:50 PM