A Summer of *Wrestling* 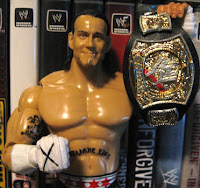 I'm not one to put something down just for the sake of doing so. I'll give credit where credit is due. While I'm no huge fan of the current wrestling scene it seems that this summer, in particular the last couple of weeks, everything is going right in the industry that we all know and love.

Coming off of a great pay-per-view event headlined by one of the greatest matches that I've ever seen, WWE finally seems to be understanding their audience. There has always been a way to present the product in order for all of their target viewers to get what they want out of it. Did it take an "approved shoot" promo and storyline involving CM Punk for the company to "get it?" Maybe. For all we know, this current wave of interesting angles and amazing in-ring action could end by next week. This time the WWE's signs of change just feel...different.

The unheard amount of in-ring action coupled with continued twists and turns concerning the future of the storyline side of WWE's authority figures made this past Monday's episode of Raw yet another glimmer of hope. Results from the taping of the next Smackdown episode seem similarly promising.

Aside from Punk's win, the winner of the Smackdown Money In The Bank match at the pay-per-view pleased many fans as well. Daniel Bryan, just highlighted on this very blog for the release of his first action figure, could very well be on his way to winning the approval of WWE

fans the way that he captured independent fandom for so many years. Similar to the Punk situation, given the proper time and build Bryan has the opportunity to be another breakout star.

The pay-per-view also made headlines on the memorabilia front as well. An exclusive CM Punk shirt dated and emblazoned with the statement of "Best In The World" completely sold out at the live event in Chicago. Since then the shirt has sold on eBay for several hundred dollars. Fakes and unauthorized reproductions have already shown up on the auction site while the authentic versions continue to sell.

There's no doubt that the shirt is being coveted now, but my advice for anyone who's in possession of one and wants to make some money is to sell now. Just because the shirt is dated does not mean that WWE won't reproduce it. Since the event is most likely to become the defining moment in Punk's career, there would be no reason that WWE couldn't reproduce the shirt date included. As always, time is of the essence when trying to make a profit. With the DVD and Blu-Ray of the event already schedule for release on August 16, it would not surprise me to see a package deal of the event and shirt available for purchase on the WWE's shop website.

Elsewhere in the world of memorabilia comes this weekend's San Diego Comic Con. The SDCC has almost become a second Toy Fair where companies unveil their future products. Both Mattel and Jakks (for WWE and TNA respectively) are slated to have booths as well as stars from both

Collectors are as interested in hearing from the companies as they are in seeing new product. The popular Legends lines from both manufacturers are rumored to be in jeopardy. Jakks continued production delays on all of their TNA products is another topic

sure to be brought up by those attending the show.

And of course the arrival of August marks the annual NWA Fanfest. This year the event will be held in Atlanta, Georgia with more than 100 wrestling stars including "Rowdy" Roddy Piper, Rob Van Dam, Harley Race, Terry & Dory Funk, Nick Bockwinkel, Jimmy Snuka, Bobby "The Brain" Heenan, Ted DiBiase, Greg Valentine, Jerry Lawler, The Glamour Girls, and so many, many more! Over the years this event has meant more to me than any other wrestling related event that I have attended in my 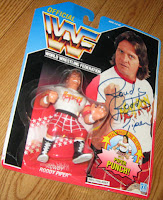 life. I'm definitely not alone in this feeling and will be marking my fifth Fanfest with a preview in an upcoming entry! If you've ever counted yourself a fan of Roddy Piper, you will not want to miss this event.

There's a reason why you are reading this and why any of the names mentioned in this entire text mean anything to you. You cared. Whether you cared twenty years ago, two hours ago, or never stopped caring, something in this industry captured your emotions. This summer, whether it be a fleeting moment or a feeling carried well into the future, you have a bevy of reasons to care once again. Wrestling is back.
Posted by J\/\/ at 9:18 PM