Each year around this time I become nothing more than a walking advertisement. In turn, this blog becomes an advertisement. It's nothing that I'm paid for, just something that I believe in. If you don't believe in what you're promoting, no one is going to believe your words. I can honestly tell you that the weekends I've spent at the NWA Legends Fanfest were some of the greatest in my life.

On August 4th thru 7th, Fanfest returns yet again to provide another dream wrestling weekend. This year the event so closely associated with Charlotte, NC ventures down to Atlanta, GA. Although the events are never officially themed, this year the

flavor is most definitely that of the legendary Georgia Championship Wrestling promotion. 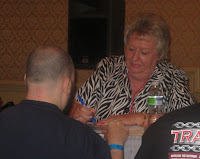 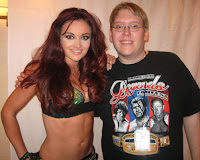 Manny Fernandez, Paul Bearer, Luke Gallows, Candi Devine, and Pampiro Firpo just to name a few? From the legendary to the modern to the absolute hardest names to meet on the convention scene, there really is something for everyone at Fanfest.

Meeting and greeting is just part of the greatness of Fanfest. Since the convention takes place from Thursday to Sunday, there are events scheduled throughout. Question and answer sessions, a true

blue NWA wrestling event, and the famous Hall of Heroes banquet and induction ceremony are just a few of the highlights.

The Hall of Heroes is an especially unique event at each years Fanfest. After an amazing banquet where you will dine with a wrestling star at your table, several legendary names are inducted into the Hall of Heroes. The evening can prove to be very emotional and memorable as many of the stars are inducted posthumously. Some of the late stars were once even guests at Fanfest, bringing back personal 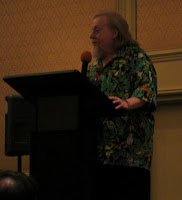 memories for attendees themselves. This year the inductees are The Assassins, Ron Garvin, Sir Oliver Humperdink, Gordon Solie, Ray Stevens, The Masked Superstar, and Ted Turner.

The induction of Humperdink will be especially poignant as this is the first Fanfest since the legendary manager's untimely passing. Many Fanfest attendees have great memories of the man lovingly known as "Humpy" as he was a virtual staple of the event. I had the opportunity to share Mr. Humperdink's Hall of Heroes banquet table two years ago and feel honored to have had the chance. It will be another honor to be present at his own induction where I know that both he and his good friend Gary Hart will be in spirit. 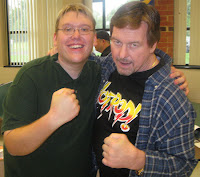 A new addition this year is also one that has many fans buzzing. After a night of NWA wrestling at an off-site location, fans returning to the hotel will be treated to a night entitled "All My Rowdy Friends" starring the one and only Roddy Piper. Fans will also have photo opportunities to not only pose with Piper in his legendary Pit, but to also hold the Starrcade "dog collars" used by Piper and Greg Valentine...while standing next to the legends themselves.

If you haven't already made plans, what are you waiting for? Check out NWALegends.com for more information and stay tuned...more Fanfest memories, stories, and previews next time!
Posted by J\/\/ at 10:11 PM

Glad to see Oliver Humperdink get the honor this year!