Oh, Blog-i-o, Tell Me Everything You Know... 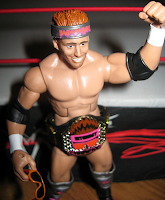 I've always been a fan of belts.  What is the point of clawing up through the ranks of pro wrestling unless there's a shiny gold belt to grab?  Many fans complain that belts are devalued today.  That may be so, but to me championship belts are one of the last remaining vestiges of wrestling's glorious past.

When the Hasbro WWF figure line was introduced, one of the things that attracted me to the Ted DiBiase figure was that the iconic Million Dollar Belt was included with the figure.  It looked exactly like its real life counterpart and could fit around the waist of most of the other figures.  I still love the Million Dollar Belt as much as I don't like custom belts that take the place of a standard belt.  Examples of the latter would be the Smoking Skull belt or Jeff Hardy's version of the TNA World Heavyweight Championship.  The difference is that if a prestigious title such as the WWF World Heavyweight Championship is won, each champion should hold a title that represents the organization as a whole, not the champion himself.  The Million Dollar Title represented the excesses and greed of Ted DiBiase, not being the best wrestler in an organization or the world.

In 2012 we have a belt that not only represents and resembles its owner, but one that finally has an action figure-sized version like the Million Dollar Belt first did over two decades ago.  Zack Ryder's Internet Championship represents exactly how the WWE superstar was able to experience a dramatic rise in popularity in the past year or so.  Cultivating a large fanbase through social media and other online outlets, Ryder introduced the title as part of his often comedic character.  Mattel has capitalized on this and included the belt with their newest figure of Ryder in their WWE Elite Series 17. 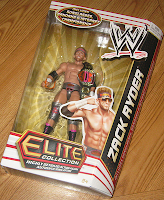 The figure comes in the standard Elite series packaging with the large window bubble.  I've felt that the sleek looking white and red packaging that Mattel switched to around a year ago has been a huge improvement.  The black and red packaging used in the first few years of the line was not nearly as aesthetically pleasing to me, and the packaging from the Mattel Legends line dwarfed the figures.  If you ask me, it should always look like more money was spent on the toy inside than the packaging around it.

A very good facial likeness of Ryder has been captured here, although you may end up not seeing it half of the time.  As with most of the Elite figures, multiple accessories are included.  In addition to the Internet Championship, removable sunglasses and "WWWYKI" (Woo, Woo, Woo, You Know It) headband are included.  They fit nice and snug and make the figure really stand out. 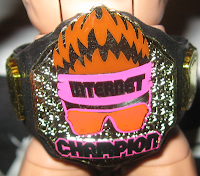 The Internet Championship itself, complete with Ryder's hair, glasses, and headband, is a hoot to look at.  It fits nicely around the figure's waist, although it looks better hoisted into the air or over the shoulder as it is inside of the packaging.  It has multiple holes on the strap so that you could conceivably have Zack "lose" the belt to a beefier challenger, but it looks quite at home on this "Broski."

I know you've been waiting for it.  Torso joint.  Yes, it's here, and it doesn't bother me all that much.  I think I'm learning to accept it.  I still don't see the need for it on 99% of figures.  If my Lanny Poffo figure doesn't have the feature, none should!

This is going to be a tough one to find if it's on your shopping list this holiday season.  Zack is a popular character with the kiddos and older fans alike.  One glimmer of hope for those looking for this figure is that there are two other Ryder figures out there right now as well, including one at a lower price point.  There's no denying that this is the nicest of the lot, and the Internet Championship belt seals the deal in my book.

Mattel is having a banner year with the WWE line.  Some issues, such as more new characters, are looking to have been addressed.  Others such as poor distribution with the Diva figures as well as "First Time In The Line" gems still have a ways to go.  There has to be a way to compromise between company worries and fan demand. 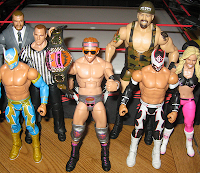 Just a few weeks ago I showed some exclusive photos of upcoming Mattel WWE figures to be released in the coming months.   As long as Mattel continues to provide a variety of characters like this, I think that they'll continue to serve collectors well.  Will I be picking up (and reviewing) some of these products?