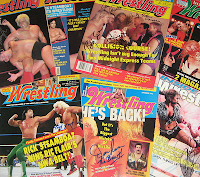 At this time of year it is tradition and memories that often bring the most comfort.  Reminders in the form of family and friends, food on the table, and a general sense of security is what we should all really be thankful for.  For us lucky enough to be fans of pro wrestling, we often hold onto similar pillars of the past as an assurance that all is well in the world of our favorite pastime.  Last week, that comfortable world was jarred just a little bit. 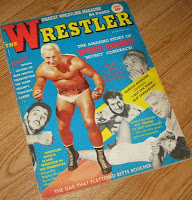 When news broke of two legendary wrestling magazines, Inside Wrestling and The Wrestler, being discontinued, I was saddened but not shocked.  The world of print media has been jumping to digital form for a number of years now.  It was a testament to both the editorial force behind the magazines as well as their loyal readers that the titles remained as long as they did. 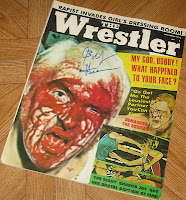 I can't count the times I've seen and heard fans recall their first look at a classic issue of one of these titles.  One look at a cover like the November 1970 issue of The Wrestler could cause it to be a seared into a fan's brain forever, regardless of age!  The cover, featuring an intensely bloody Bobby Heenan, was a great example of the old wrestling adage that "red equals green."  The crimson mask shown on "The Brain" certainly made the issue one of the favorites of fans worldwide. 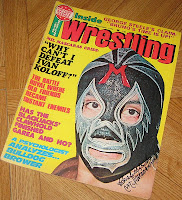 The violent side of wrestling wasn't the only type of memorable cover.  Many times it was a case of grandeur.  When a cover featured a champion boastfully holding or wearing their championship belt, that proud feeling could transfer right over to the fan buying the issue.  No matter the snide looks of the convenience store clerk condescendingly grabbing your money, you were purchasing a magazine that featured the best in the squared circle.  A championship belt wasn't always even necessary, such as when the cover featured Bill Apter's favorite wrestler, the colorful Mil Mascaras. 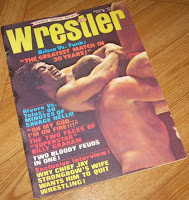 A portrait, bloody or otherwise, wasn't necessarily the calling card of these magazine covers, either.  Sometimes it was an iconic moment celebrating the glory and athletics of wrestling.  The photographers used by these magazines were obviously chosen wisely.  It's a chore to find a non-memorable cover of these titles. 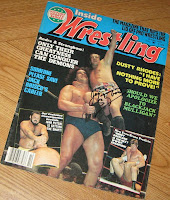 Of course, the cover only tells half the story.  Inside both magazines was a treasure trove of photos as well as stories that often rivaled those being told on the wrestling television programming.  Covering stars from all over the country, it was through these magazines that fans got a taste of what was going on outside of their own area.  When wrestling went national, it was a way for fans like me to discover promotions such as ECW and Smoky Mountain Wrestling.  Although I may not have seen the actual footage until the past decade, I was aware of and following the Eastern Championship Wrestling battles of Tito Santana, Jimmy Snuka, and Johnny Hotbody well before the promotion went Extreme.  And let us not forget that Taz himself made it into the pages of Inside Wrestling before he went Extreme, as well! 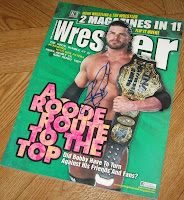 A few years ago both titles were merged into one magazine.  The double-sided issues each had their own equal amount of content and continued the tradition of great covers.  It was in this era of the magazine that I am proud to say that I was a small part of with a story about "The One Man Rock Band" Heath Slater earlier this year.  While not a journalistic superstar of wrestling like the fabled Matt Brock or Liz Hunter, it was and is a childhood dream fulfilled to be involved with the Stanley Weston family of wrestling magazines. 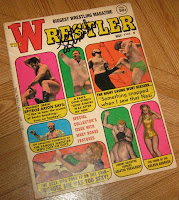 On the upside, we still have the flagship wrestling magazine, Pro Wrestling Illustrated, to enjoy.  The tradition of wrestling coverage, both written and photographic, thrives in those pages. There will always be a place in my collection for what I will continue to deem "straight-off-the-shelf wrestling collectibles."  Between all of the great issues of the past covering the entire spectrum of Weston magazines and what's still to come with PWI, I think we have a lot of enjoying left to do and many more memories to be made.
Posted by J\/\/ at 7:00 PM

I didn't know about this. That's saddens me. Throughout the 80's I bought all the wrestling magazines. I wish I still had them. I had a huge collection.

I've been told that PWI is indeed alive and well!

The loss of these print magazines is a sad sign of the times. During my youth in the 70's The Wrestler and Inside Wrestling were not just a slice of my life, they were essentially the whole pie.Long Live the memories!