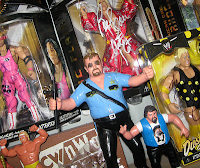 Like any form of collectible, wrestling memorabilia goes up and down in price as time goes on.  Some items will simply never drop in value while others have gone from amazing heights to being practically worthless in a monetary sense.  It's all about timing as well as trends in both collecting and the wrestling industry.  Even events ranging from the latest developments on wrestling television programming to unfortunate passings can have an effect.

While I always preach that what really matters is why an item is valuable to YOU, it's always interesting to look at how much, or how little, some of these items have been selling for.  For those of you new to the blog, this is the latest installment in our longest-running regular feature that we call Wrestling MarketWatch.

This time around we'll be looking at a handful of items that have had rather surprising selling prices as of late.  These are items that were selling for less just a short time ago.  We'll also try and analyze just why these particular items have seen their demand rise.  Enough chatter, let's get to the goods...

*Pre-recorded media is always an interesting topic as far as monetary value.  While the layman will dismiss VHS tapes as being antiquated and worthless, prices for many of those are as high as they were a decade ago.  DVD has largely followed in the same path, but it seems like a relatively common disc will suddenly become "hot" every couple of months. 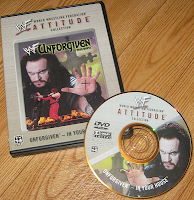 In 2002, the WWF re-released several "Attitude Era" videos on VHS and DVD as the "WWF Attitude Collection."  At the time the releases sat on the shelves and were relatively unpopular.  Obviously this has changed.  For one thing, the "Attiude Era" is suddenly the top wrestling nostalgia period.  It being a prime selling point of the WWE '13 video game as well as an upcoming WWE DVD release will only further this.

Another factor is that DVD material from before the "WWE" rebranding with the unblurred WWF logo has always been highly sought after.  These "Attitude Collection" DVDs were released just before the changeover, thus cementing them into that niche.  Although several compilation titles were released under this banner, Unforgiven 1998 was one of the few pay-per-views that made the cut.  This title recently sold for $53 with some of the others going for as much as $150! 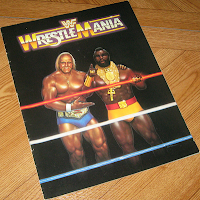 *Event programs are some of my favorite wrestling collectibles.  If you've followed this blog long enough, you know that, as I do tend to feature them often.  The WrestleMania programs will always have a highly collectible shine, as there is no end in sight for the annual event.  Although some of the '90s WrestleMania programs have been selling at high prices for many years, examples from the earlier events had trouble selling at just $10 and $20 not long ago.

Times have changed and apparently so has demand.  Perhaps more collectors are trying to acquire all of the 'Mania programs (a few years did not have a program produced), especially since the ones from recent years have been widely available.  The program from 1985's inaugural WrestleMania has recently been selling from between $50 and $60.  With the iconic cover of Hulk Hogan and Mr. T and great photography inside of both the participants and guest celebrities, it's a publication worthy of any collection. 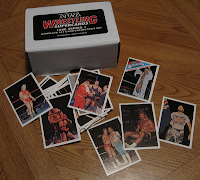 *1988's NWA trading card set by Wonderama is one of a few wrestling card collections that I will always declare to be underrated.  A wide array of names, a huge number of cards, and a design that really captures Jim Crockett Promotions in its final months add up to a great card set.

Putting together an entire set one-by-one is a difficult, but not impossible, task.  With nearly 350 cards it won't be easy.  Online sellers have had complete, mint, sets available for a few years now for just around $40.  Recently the price has doubled to around $80 per set.  Even at the current average, it's a fantastic deal for a card set that should only increase in value as the years go on. 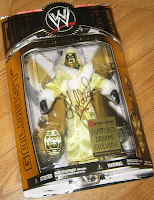 *You will remember the name...and the action figure.  While plenty of Goldust action figures have been produced since the first in 1996, there will never be a nicer one than the one made by Jakks for their Classic Superstars line.

Sold as an online retailer exclusive, the figure is clad in the character's trademark robe, wig, gold strap Intercontinental Championship, and is even in gold packaging.  Originally selling for around $25, demand has gone up with Goldust being released from WWE and being much more accessible for autographs.  Between $70 and $80 seems to be the current average, while just a few weeks ago the price had topped out at $100.

*Remco's AWA action figure line is another topic that frequently shows up here.  A favorite of many collectors, the AWA line features a legendary lineup and designs that include cloth clothing and various other accessories.  Obviously examples that have those often-lost accessories will command a higher price.

The Road Warriors and Paul Ellering are among the most popular wrestlers in the line, however their figures were produced early in the run.  Figures from the last few series were produced in smaller numbers and therefore sell for more.  While Hawk, Animal, and Paul always did decently with their accessories included, a recent sale price of $100 for the trio is high above average.  To be considered complete, Hawk and Animal must have their studded collars, cloth chaps, and tag team belts while Ellering's "Road Warriors" shirt must be present as well.

A mix of items new and old that collectors are out hunting for.  I've said it before and I'll continue to say it: buy what YOU like...not what Joe Blow next door wants or has.  It'll pay off in the long run via the only thing that really matters...your enjoyment.
Posted by J\/\/ at 7:00 PM

Man, what's odd about the Attitude Collection is that in Europe, we've had the events and releases of that era for years with the actual content unchanged, but with the logo changed on packaging/front of disc.

With the European DVD licensor in trouble over the past two years, a whole flood of the Attitude Collection DVDs quietly hit the market again in 2011, outside of their own official catalogue/mailorder service, cheaply pressed and of course with WWE logos. Austin 3:16 Uncensored and Survivor Series 87-97 go for as little as 1.49 euro in discount shops here in Ireland, and other titles litter the shelves of actual DVD shops for around five euro.

Heads up to your US readers looking for wallet-friendly alternatives to paying out the butt. :-)

And with Blu-Ray players playing DVDs from any region, it's really a good way to go!