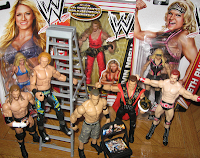 The holidays seem to creep up faster each and every year.  I'm not complaining a bit.  The thirty or so days when people tend to act a bit more like they should.  Christmas music.  The hustle and bustle.  I love it all.  But what do you get for the wrestling fan on your list that has it all?  Maybe there's even a young "WWE Universe" member that's looking for a present from under your tree.  As seems to be the case every year, there's no shortage of gift ideas.

From watches to bedsheets to countless pieces of apparel, the WWE logo and its respective characters are plastered everywhere once again.  One licensee that seems to be going above and beyond is Mattel.  My continuing gripes regarding short packs of Divas and other special figures notwithstanding, Mattel seems to be getting their WWE line into any store that you can possibly think of.  From department stores like Kohl's and Sears to drug stores like Walgreens and Rite Aid and even at grocery store chain Aldi, it's hard not to run into the Mattel WWE product.

As is usually the case, Toys "R" Us was given some exclusive figures and series to spice up their holiday sales.  Coming off of the heels of the Michael Cole "Build-A-Figure" released through the chain this past Spring, Toys "R" Us now has a series of four WrestleMania XXVIII Elite figures that include the components to build none other than Alberto Del Rio's personal ring announcer, Ricardo Rodriguez.  CM Punk, The Big Show, The Miz, and Shawn Michaels (in referee attire) are the four figures which each contain pieces of Rodriguez along with his WWE microphone.  The likeness of Rodriguez is fantastic and as long as the "Build-A-Figure" entries are kept interesting and the figures required to complete it are nicely done, I'm all for this approach.

Toys "R" Us also has an exclusive series of four WrestleMania XXVIII Basic figures that each contain pieces of the WrestleMania announcers booth.  John Cena, Triple H, Sheamus, and The Rock (in a figure that, to me, looks more like a South Park version of Dwayne Johnson) are in the series that comes at a lower price point than the "Build-A-Figure" series. 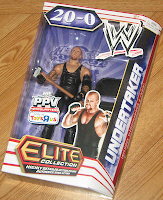 Shoppers who found the figures early enough were treated to yet another exclusive from the store.  A special Elite "20-0" figure of The Undertaker was given to shoppers who purchased $30 or more worth of Mattel WWE items.  Although the promotion seems to be over, locations that have leftover figures have been selling them for $19.99.  This is the first figure of The Undertaker to feature his shaved head look which debuted at WrestleMania XXVIII.  The figure comes in special Elite packaging featuring a dramatic purple background.

As I mentioned earlier, Toys "R" Us is far from the only retailer carrying the line, and many figures of various styles and price points are popping up.  Mattel's Elite 18 series is beginning to show up in time for the holidays and includes a character never before released in the Mattel line: Jerry "The King" Lawler. 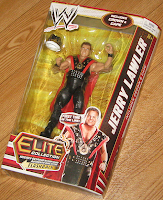 Much to the chagrin of many collectors, Mattel's WWE Legends line is now mostly confined to "Flashback" entries in their Elite collection.  The Elite 18 series contains two such "Flashback" figures, Lawler and The Undertaker from his biker era.  While the latter was a visually unimpressive figure to me (Jakks made several very nice "Biker 'Taker" figures that I feel can't be beat), figures of Lawler will always intrigue me.

When prototype photos of this figure of The King first surfaced, I didn't care for the facial likeness.  Upon seeing the figure in person at Ringside Fest, the figure looked more like Lawler to me.  Although this figure is labeled "Flashback," it's actually based on his appearance at WrestleMania XXVII.  The artists rendering on the front of the package would be based on photos of this appearance, as well.

Speaking of packaging, Mattel has begun a slight tweaking of the boxes and design for their entire WWE line.  A bit more red is going into the design and the "window" on the top of the Elite packaging has been eliminated.  The Elite packaging has grown on me as a whole and presents the figures with great visibility while not dwarfing them in the process.

This is first figure of The King to be released in about five years.  Since Lawler wore entrance attire based upon his Memphis days in the WrestleMania appearance on which this figure is based, you could argue that the attire doubles for "classic" Lawler as well.  The attire is all in one piece and is removable via a peg in the back of the belt.  Slide the piece off over the head and the figure is in the classic Lawler one-strap singlet.  His wrist bands with crown logo are a nice touch.  Lawler wore an elbow pad in the actual match, but the omission of it here is nothing to complain about. 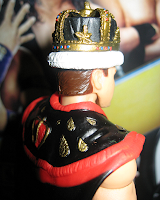 The crown is well-made and resembles the one included with Jakks figures.  The headpiece fits perfectly on the head and does not look over-sized.  I prefer the figure holding it in the left hand, as Lawler frequently does.  The right hand is clenched and perfect for Lawler's signature fist drop.  For those wondering, articulation in the hips and legs makes the figure perfectly capable of performing Jerry's other signature maneuver, the piledriver, even if it is "banned" from WWE.

My main gripe with the prototype was the face.  I wasn't feeling "The King" when I looked at it.  In person, it definitely resembles the Jerry Lawler of today.  I'm not going to call it perfect, but it is very good and does nothing to detract from such a great figure.

For a bevy of reasons, I don't think that you'll be seeing this one warm the pegs.  It's a first time Mattel figure of an all-time great who still has a weekly television presence.  The recent attention stemming from his heart attack and subsequent recovery will only add to that.  And as if my reviews had any say, the fact that I would deem this a candidate for "Figure of the Year" only makes it a better bet that The King is one to grab.  Mattel has stated in the past that we could see future Lawler releases based on sales of this figure.  Long Live The King!

Figures aren't the only great item for the wrestling fan on your list, and are probably not even my favorite this year.  To say that I was excited when Topps announced a new 2012 WWE Heritage trading card set would be an understatement.  Considering that I've been publicly asking for one for years, the news elated me.  The product has hit, the legendary stars and designs are here, and coming soon on this blog, we'll be exploring the Heritage!
Posted by J\/\/ at 7:00 PM