In the past couple of years, it's almost become tradition that at some point in the last quarter the Von Erich family makes the blog.  Is it any wonder?  Despite being what was essentially one of the last great wrestling territories, World Class Championship Wrestling had an immense selection of merchandise.  It wasn't just what was sold at the arenas, either.  WCCW fans were true packrats, obtaining any photo or bit of information that they could on their favorite heroes and villains.  From the Von Erich brothers, The Fabulous Freebirds, and everybody in between, WCCW's stars were among the most visible in the early '80s wrestling world. 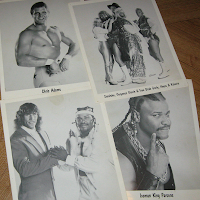 I'd go as far as to say that on the topic of WCCW memorabilia, the fans themselves were as big a part of it as the wrestlers.  Endless passages have been written chronicling the Von Erich "fever" that is said to have spread as far as Israel.  Many of these fans were girls, usually in the 12-24 age range, who would've followed the boys to the ends of the earth.  These fans most likely had shrines to their favorites plastered all over their bedroom walls, as is evident by the abundance of newspaper and magazine clippings that survive today.  Those lucky enough to have access to WCCW events (or knew someone who did), may have even had official promotional photos or publications from the promotion.  Some of those may have even included autographs.

Most wrestling fans know the reason why autographs of the Von Erich family and many WCCW stars may be a bit harder to obtain than other wrestling stars of the era.  It's a sad and somewhat depressing fact when collecting autographs, that death will almost always factor into desirability.  With the tragedies surrounding the Von Erich's and other WCCW stars so early in their lives, the window of opportunity was never even open for many collectors. 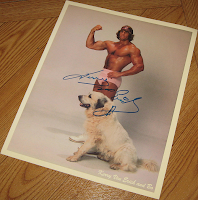 I, myself, have become the lucky owner of many Von Erich family and WCCW treasures, despite not being anywhere near the age or geographic location to have originally obtained them.  The items span the full range of the Von Erich legacy, from the highest of highs to the too-frequent tragic ends.  They reflect a point where, due to the quality of the items, it seems as if WCCW almost touched the unmatched WWF merchandising machine.  They can also be a sobering reminder of how the insane rock star-esque fandom came crashing down and went ultimately six feet under.

The Official Von Erich Family World Class Championship Wrestling board game is definitely one of the highs.  The well produced, if maybe a bit complicated, game is as nice as any other wrestling company's equivalent.  With a full color box featuring the famous WCCW logo and photos of the Von Erich brothers disposing of several foes, the game itself allows you to become Kerry, Kevin, Mike, One Man Gang, Iceman King Parsons, Chris Adams, Gino Hernandez, or Kelly Kiniski.

For an exact look at 1984, one of the most tumultuous years in Von Erich history, look no further than the Von Erich Fan Club newsletter titled "CLAWPower."  It seems that four total were issued, one for each quarter of 1984.  Even then, it is telling as to how the death of David is almost swept under the rug.  The glories of Kerry and Kevin, in "honor" of their late brother, are instead touted to further strengthen the family legacy in the eyes of the public. 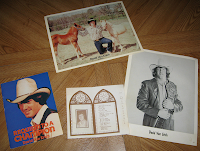 And then there are the items that are extremely historical, yet almost too difficult to own.  The aforementioned Von Erich fans were obviously a dedicated bunch.  Some went as far as to clip the obituaries and news coverage of the brothers deaths.  Some fans even obtained and saved actual funeral cards.  Some collectors might find items such as these just too disturbing to own, but placing them in perspective tells the full story, beginning to end, of the family and promotion. 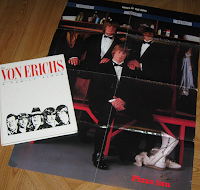 In looking at these items, I rarely feel sadness.  Certainly Beatles collectors don't feel sadness every time that they view a John Lennon item.  Instead, collecting and preserving these pieces should keep alive what was an exciting and interesting era in professional wrestling.  It didn't last as long as it may have had certain events not occurred, but we can always hold onto what was.  After all, keeping memories alive is what collecting is all about.
Posted by J\/\/ at 7:00 PM

WCCW was great! It became my favorite promotion in 83 when the syndicated show came to Chicago.