Signature Moves: Signing The Best Of The Ring

If you're an autograph collector with any kind of love and respect for the genre that you collect, you know that each and every signature is priceless to you.  Whether it's on a glossy photo or an index card, a magazine or a napkin, that autograph has a story and meaning to you, the fan and collector.  That being said, there are some items that simply scream "autograph" as if they were produced specifically to be signed.  With the amount of wrestling merchandise out there, it's no surprise that many items fall into this category. 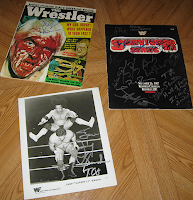 Magazines, programs, and photos are almost a given.  You can't go wrong with a classic promotional shot or glorious magazine cover from the days when the publications were a prime source of wrestling action and info for fans.  Programs from major events or even pay-per-views can become "projects" of sorts enabling the collector to add as many signatures of individuals involved in the event as possible.  The darker solid covers of many of these programs add to the effect. 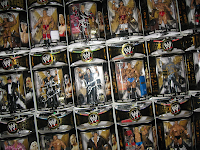 Wrestling collectors who are into the merchandise but are not necessarily familiar to autographs often ask which action figures are the the best to be signed.  The answer to that would be those that come out the nicest after the fact.  My answer to this has always been the Jakks WWE Classic Superstars line.  With dozens and dozens of stars from all eras to choose from, a favorite star of any collector is bound to have been produced.  The window "bubble" of the packaging also provides the perfect area for the wrestler to sign. 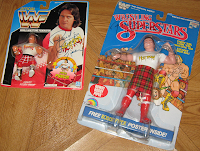 While many collectors want to have the LJN WWF figures from their childhood signed, they simply don't offer the same benefits that the Classic Superstars do.  The colorful cardbacks can make it hard for the wrestler to find a solid place on which to sign.  The large "bubbles" holding the figures onto the card can also make it difficult for the wrestler to sign at a decent angle.  A nice alternative can be the Hasbro WWF line, which feature a large portrait photo of the star.  A recent craze of these figures has driven market prices sky high, making them a little less than ideal to purchase at this time. 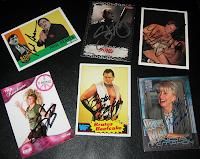 Trading cards are a long standing favorite of autograph collectors.  Very few wrestlers haven't had at least one card over the past twenty-five years or so, and many remain at afford prices.  Cards are easy to carry, easy to store, and more often than not provide an excellent photo of the star.  Newer cards can be somewhat tricky, as most new card product is produced with a glossy finish.  This can sometimes cause the autograph to "bubble" and become a mess as soon as it's been signed.  Many collectors (and even some of the stars) know that it's advisable to "rub" these glossy cards before they're signed.  A light rub with a pencil eraser can help create a smoother surface in which to sign, and I've ever seen certain female stars rub the cards on their leg before signing since the oils in skin will have a similar effect.  All in all, the "glossy" issue makes me love the Topps Heritage releases all the more, since they're produced on non-gloss stock similar to vintage cards.

One trend that I've found myself partaking in over the past few years are 4x6 photos.  Whether purchased or printed yourself, 4x6s are easier to handle and store than 8x10s.  Lower quality photos easily found on the Internet can be whipped into easy and attractive custom creations that are often appreciated by the wrestler featured while signing due to the extra effort of the collector.  4x6 reprints of expensive 8x10 official promo photos are also an affordable alternative to scouring the Internet for originals. 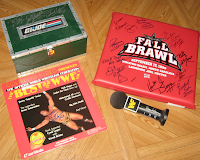 Still, sometimes the best item to be signed is one that no one ever would've thought of.  Not only do the wrestlers themselves get a kick out of signing these items, but it provides you with a unique conversation piece.  Occasionally it can transform an otherwise pedestrian item into a collection centerpiece.  Collecting is all about obtaining what you like.  Customization and thinking outside the box will make that collection all the more your own.
Posted by J\/\/ at 7:00 PM

I find magazine covers to make for the best autographs. Usually the wrestler comments on them as well as they are seen less by them compared to photos or figures. Plus they make great display pieces.