Memorabilia That Takes You Into The Ring... 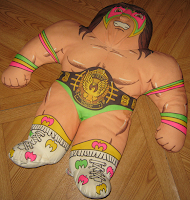 Putting the action figures, video games, and other toys aside, there are some wrestling items that can truly make you feel as if you're a part of the action.  These toys and collectibles can best be classified as "role playing" items.  In the same vein as replica championship belts, holding or wearing these trinkets can transport you into the boots of the superstars of the ring.  A sampling of this style of collectible from various eras is what we'll be looking at today.

The most famous "role playing" toy in the wrestling world is without a doubt the Wrestling Buddy.  The "buddy" phenomenon began in 1990 with Tonka Toys picking up the WWF license.  These printed pillow people were designed for children to be able to "wrestle" with their favorite World Wrestling Federation heroes and villains.  The first series included Hulk Hogan, Ultimate Warrior, Randy Savage, and Ted DiBiase followed by a second series of Jake Roberts, the Big Boss Man, and the Legion of Doom.  WCW and Mexico's CMLL followed suit with Wrestling Buddy-styled toys of their own, but the WWF characters remain the most remembered.

1990 also saw another classic WWF role playing toy produced, although not quite as well remembered as the Wrestling Buddies.  A company called PlayTime Products introduced an official WWF Microphone toy.  While there have been other WWF and WWE microphone toys produced since, this is still the only one to pattern itself after the classic WWF mic held by Mean Gene Okerlund, Howard Finkel, and so many others in the '80s and '90s.  Several wrestling sounds and a voice amplifier can be utilized when a nine-volt battery is attached, but it's the look of this toy that really makes it something special.  The box, featuring a classic "Let Me Tell Ya Somethin', Mean Gene!" photo of Okerlund and Hogan, only adds to the fun. 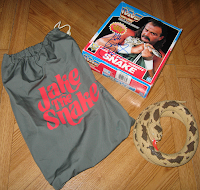 The boom of wrestling toys of the early '90s produced yet another such item, this time as an extension of the popular Hasbro WWF line.  It is not uncommon for manufacturers of action figure lines to branch out into other toys utilizing the same license.  Hasbro did this with Hulk Hogan and Ultimate Warrior dress-up kits, but a less remembered item is the Jake "The Snake" Roberts Snake toy.  Hitting shelves in late 1991-early 1992, the snake was packaged in a squarish box featuring Jake and one of his snakes.  Inside was a green drawstring bag that resembled Jake's ring-used bag aside from being much smaller and including the "Jake The Snake" logo.

The snake itself was tan with brown spots and didn't really closely resemble any of Jake's snakes.  Was it Damien?  Perhaps Lucifer?  It's any one's guess really, as no specific name is mentioned on the packaging.  The item was probably designed roughly around the time of the on-screen "death" of Damien and subsequent debut of Lucifer.  The toy didn't last long on shelves, as Jake departed the company shortly after its release.

If the snake didn't creep you out, fast forward to the present day and the most recent role playing items released by WWE.  There's no doubt that among the WWE debuts of 2013, no superstars garnered more interest than the Wyatt Family.  Led by Bray Wyatt, this band of backwoods brawlers are sure to receive some interesting action figures in the coming year, but their first pieces of merchandise include several role playing items.

Wyatt, the bearded spokesman of the group, is known for his fedora.  One of his underlings, Erick Rowan, strikes fear into the hearts of many WWE Universe youngsters with a mask of a sheep's head.  Both of these items are now available from WWE and appear to be exact replicas of both.  Although the Wyatt Family aren't exactly heroes, it once again proves that merchandise of either heels or faces is desired by fans as long as it's interesting.  These two items fit that description perfectly.

Role playing items are fun, but just a small example of some of the great wrestling memorabilia out there.  If you're new to the blog, you may not be aware of our Facebook Fanpage.  Join the page for frequent updates, hundreds of photos of memorabilia, and much more.  It's a great supplement to the blog!
Posted by J\/\/ at 7:00 PM