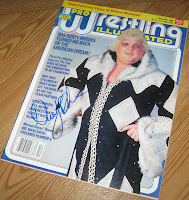 It's been awhile since I've made a "Coming next week..." promise here on the blog.  Aside from a few consecutive ongoing series entries, the last real promise that I can remember came around four years ago.  For whatever reason at the time, the entry never took place.  Most likely it was just lost in the shuffle in favor of other topics.  The "lost" entry was to have focused on my favorite pieces of merchandise featuring one of my all-time favorite stars.  Seeing as that his PWI debut issue cover mate, Mil Mascaras, was the focus of an entry just a few weeks ago, I figured that it was finally time to show some of my favorite pieces of memorabilia of the "son of a plumber," "the bull of da woods," "the common man," "The American Dream" Dusty Rhodes. 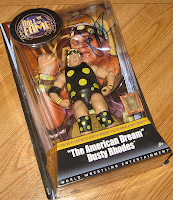 Dusty appealed to me from the first time that I saw him.  If there was ever a living breathing superhero that didn't LOOK like a superhero, it's "The American Dream."  It's possible that the look is part of what captivated me.  It was easy to see why Hulk Hogan was a hero to millions.  He not only had the charisma but he looked the part as well.  Dusty admitted in many promos that he didn't look like a star athlete, but it ultimately didn't matter.  Even upon his return to the WWF in 1989, a far different place than the WWWF he had left a decade earlier, Dusty was embraced by the fans with open arms.  These were the same fans who were used to the Godlike physiques of Hogan and The Ultimate Warrior, yet roly poly Dusty was just as believable as a hero to them. 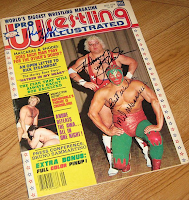 It's fitting that Dusty did indeed grace that first PWI cover with Mascaras in September 1979.  Two of the most popular stars of the decade closing it out on the first issue of the wrestling magazine that would end up lasting longest on the newsstand.  In fact, as soon as Dusty stopped being an "Outlaw" and became "The American Dream" in the mid-1970's, he immediately graced the cover of a large percentage of the Apter/Weston family of wrestling titles.  With his large array of outfits from a t-shirt and jeans to some of the most outlandish robes ever created, Rhodes was an amazing hybrid of cowboy and disco star.  In some shots from the decade you can even see "The Dream" in polka dots, a style that many mistakenly believe only became synonymous with Dusty after 1989.

Now that all fans are aware of Dusty's true position within Jim Crockett Promotions in the 1980s, it's no surprise that "The Dream" appeared on most of the merchandise put out for the company.  T-shirts, trading cards, bandannas, and of course programs all saw the presence of Rhodes, with the highlight possibly being the 1988 Bunkhouse Stampede event program.  While the cover is simply a white cowboy hat with the NWA logo (the confusing one that looked more like it said AWA) on it, you know who it is meant to represent.

Of course, it's the merchandise marking Dusty's 1989-1991 WWF run that is probably most remembered today.  Some look upon the era as if it's a dark spot in Dusty's career, but true fans and "The Dream" himself will tell you otherwise.  A little bit of each of Dusty's persona's were captured in the stint which ran just under two years.   1989 was largely Dusty feuding with his old foe the Big Boss Man as well as others in the company who liked to "boogie" such as the Honky Tonk Man and Akeem.  1990 saw "The Dream" in his two highest profile WWF feuds against "Macho King" Randy Savage and Ted DiBiase.  In a move that to this day largely goes unnoticed, "The Common Man" took a dark turn following SummerSlam 1990 where his beloved Sweet Sapphire was "bought" by DiBiase.  Rhodes stopped dancing, the yellow polka dots turned to a dark red, and two pieces of his attire from years earlier made a return: his black ring jacket and that creepy hat with a chicken leg sticking out.

Seeing as how popular he was during this time, Dusty finally met with the magic of the WWF merchandising machine.  Dusty Rhodes post cards, promo photos, folders, and notepads were available as was the famous first action figure of "The American Dream."  The figure has always been one of the most sought after from the Hasbro line.  It is still popular with collectors, although thanks to Jakks and Mattel we now have many others to choose from.

My all-time favorite Dusty item?  Not a magazine cover, photo, card, or action figure.  It's a piece that ensures that "The American Dream" will stand tall and proud for generations to come.  It has the United States championship belt, the aforementioned ring jacket, and a million dollar smile to boot.  It is a larger-than-life cardboard Dusty Rhodes that was used in the 1988 Mello Yello-NWA tie in.  Dusty made a live action commercial as part of the promotion as well.  An NWA-Mello Yello logo hat was produced, as were several series of Mello Yello cans that featured various NWA stars.  Dusty is "holding" a variety of those cans in his cardboard counterpart, and although "The Dream" has told me that he has another piece from the Mello Yello campaign, he did not remember this one at all.

Meeting "The Dream" is always an experience.  He definitely has the ego that even he admits is a big part of Dusty Rhodes.  On the other hand, Rhodes usually also showcases the charm that you would expect to come with all of that blue-eyed soul.  He also has probably ten different variations of his signature which he will randomly sign.  Upon request, he may even given you one of those classic million dollar smiles.  I wouldn't deem Dusty to be a "hero" of mine, but I do think he has traits that are worthy enough to emulate.  That famous Dusty ego comes from a confidence and true belief in all of his actions.  If that isn't a key attitude to follow in the pursuit of "The American Dream," I don't know what is.
Posted by J\/\/ at 7:00 PM