A few years ago we began a yearly tradition of dedicating one blog entry during the holiday season to the best wrestling-related gift ideas.  Intended more as a template for friends and relatives of wrestling fans than anything relevant to our regular readers, feedback and other data has made it clear that it's become popular with everyone! 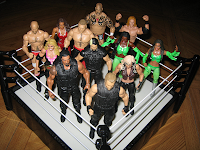 As has been evident in several of our most recent entries and a few more upcoming, Mattel has been packing the shelves with new WWE product.  From Basic and Elite figures to Battle Packs and playsets, Mattel is producing a fairly impressive line of WWE toys with no end in site.  Store exclusives abound with the ring and figure sets that are always popular with kids, but it's the individual figures that appeal to fans of all ages.  The Shield, Kaitlyn, and Bruno Sammartino should be among the most popular figures this season, and the line will even undergo a cosmetic transformation with attractive new blue packaging.  As the days of the shopping season dwindle, even those endless Rey Mysterio, Alberto Del Rio, and Randy Orton figures should be snapped up by desperate shoppers. 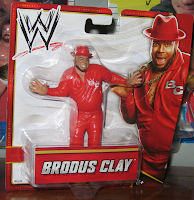 One of Mattel's WWE product lines that may be a sleeper is a set of small statuesque figures sold at Family Dollar and Dollar General stores.  These figures first showed up earlier this year, but a second series is being sold in many of these discount stores holiday sections.  At a little over four inches tall, the figures are only articulated at the waist and neck, but provide an interesting collectible in the days where every other figure seems to be endlessly poseable.  A wide variety of WWE superstars are available priced around $5 each, but my favorite is the dancing Brodus Clay, clad in his jumpsuit and fedora. 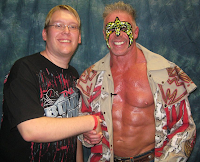 Watching WWE programming, you haven't been able to get away from the endless ads touting the release of WWE 2K14.  The video game, available for X-Box 360 and Playstation 3, features a WrestleMania mode where you can recreate or change some of the biggest matches in the history of the event.  Reviews of the game have been mixed.  Casual fans are seemingly blinded by the inclusion of so many legends and superstars, while longtime players of the franchise have been complaining that the game is yet more of the same old same old.  One large selling point is the ad campaign featuring the Ultimate Warrior himself.  His involvement is said to have included a "welcoming" of the Warrior back into the WWE family.  How far this new relationship goes has yet to be determined.

Figures and games might be a bigger gift,  but nothing stuffs a stocking better than packs of trading cards.  This October, Topps released a new "Best of WWE" card series focusing on past champions and moments.  While it isn't my personal favorite series, hearing complaints by wrestling "fans" that have no clue what they're talking about did bring me a chuckle.  Topps cannot release cards of stars who aren't under contract or licensing deal, therefore it only makes sense that the company is going to be limited in who their "Best of" cards contain.   Nonetheless, the highlights of the set for me are cards featuring moments from the 2013 WWE Hall of Fame ceremony as well as the first ever Topps cards of Bruno Sammartino. 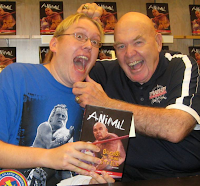 How about a gift that will keep you occupied during a snow day this winter?  A wrestling book should do just the trick.  A walk into Barnes & Noble's sports section will yield several new titles this year.  George Steele is freshly off of a book tour for his autobiography fittingly title "Animal," but he's not the only one to be found in the aisles.  Tales by Bob Holly, Jimmy Snuka, Lex Luger, and even referee Jimmy Korderas are available this year to satisfy the wrestling bookworm.  My book pick of the year will only be available for you online shoppers and is of course "Rags, Paper, & Pins."  It's the story of wrestling merchandising in Memphis and is penned by Jim Cornette and Mark James. 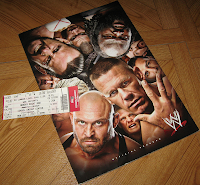 Finally, we have the most traditional gift for the wrestling fan: the ticket.  Although a fan can no longer attend a live event on Thanksgiving or Christmas, there are plenty of events held throughout the holiday season.  These days it's even possible to give tickets for events in 2014 such as the Royal Rumble or WrestleMania with how early they go on sale.  Couple that with an event program and foam finger and you have quite the impressive stocking stuffer!

No matter what the wrestling fan in your life celebrates, there's a gift listed here for it.  Most importantly, keep in mind that despite gifts big or small, it's actually the time spent with each other that is most precious of all, especially at this time of year.  That being said, since most of you cannot spend time with yours truly, birthday and Christmas gifts are ALWAYS accepted!  Happy shopping!
Posted by J\/\/ at 7:00 PM