If you're a fan of Mattel's WWE product or even just slightly interested, the next two months here on the blog will be a real treat for you.  A surge of items are already hitting shelves, many of which just happen to find their release during the holiday shopping season.  The figures here today are, for the most part, being released in conjunction with the hysteria.  Although Mattel releases exclusive WWE items for several retailers, Toys "R" Us often has the most interesting of the bunch.

Though I never intended to get them all, I've become quite a fan of Mattel's Build-A-Figure collections.  Always exclusive to Toys "R" Us, so far we have seen Michael Cole, Ricardo Rodriguez, John Laurinaitis, and Teddy Long released in this manner.  The concept is simple: a set of four figures is released each containing portions of a fifth figure.  When all four figures are opened, you are able to build the fifth.  The fifth figures have, so far, been stars who were non-wrestling personalities in the company.  These are usually characters that Mattel feels will not sell well on their own, although a Rodriguez single release figure is forthcoming.

This holiday season we are treated to two Build-A-Figure sets released simultaneously.  Both sets are completely made up of superstars in the attires that they wore at WrestleMania XXIX.  Booker T, dressed as either GM or Hall of Famer (take your pick) is included in a series of Basic figures while Paul Heyman is in an Elite collection.  The Elite figures are, as usual, at a higher price point and include more accessories.  Seeing as that these figures do include the Build-A-Figure pieces, they are priced higher than their normal Basic and Elite counterparts.  Thankfully, many Toys "R" Us stores received these figures as a "Buy 1 Get 1 40% Off" sale was occurring.  That, coupled with my well-documented love of WrestleMania XXIX, I couldn't find a reason to pass the sets up.

It should be said that many collectors are sometimes less than happy with the figures chosen to be in these sets.  Obviously a new character isn't going to be debuted among the four figures needed to build the fifth (Fandango would've been ideal here), as the selling point is already in the Build-A-Figure.  Personally, I refrain from buying any figure repaints (and sometimes even figures that Jakks produced en masse) so that when these sets are released I'm not totally disappointed in the lineups.

Sheamus, Alberto Del Rio, The Rock, and The Undertaker are in the Basic set that builds Booker T.  I've always been a fan of figures wearing their countries colors, so this is actually a welcome Del Rio repaint.  There also have not been too many releases of The Undertaker with his mohawk.  His WrestleMania attire complete with "RIP PB" (Paul Bearer) design is a nice touch.  These figures do not include accessories other than the pieces of Booker. 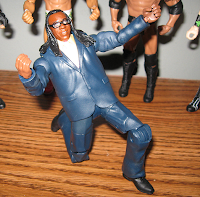 Can you dig it?  Booker T is impressive.  He's accurately a taller figure and seems to have the same legs as the Laurinaitis figure.  Booker's glasses seem a bit "cloudy" in the lenses but are removable.  They fit nice and snug into his hair.  Perhaps the only thing missing is a hand in his trademark "Five Time" pose, but nonetheless this figure is ready to perform a Spinaroonie...perhaps next to the Hall of Fame podium that is included with the upcoming Bruno Sammartino figure.

The Paul Heyman set gets a few extra points because of the Elite accessories included.  Although it was previously included with an Elite figure of The Rock, this set features the new WWE Championship Belt with John Cena.  It's a very nice accessory and perfectly compliments the metallic-painted WWE Tag Team Championship Belts that are included with Daniel Bryan.  It's interesting that the "Heyman guys" of the set are both the best and the worst.  Punk is rather bland but does include a perfect replica of the urn.  Lesnar is the sleeper of all of these.  I'm not the biggest Lesnar fan and was originally disappointed that I would have to purchase another (a Basic Lesnar was in the Teddy Long Build-A-Figure set), but upon closer examination it became my favorite among these sets.  The amazingly detailed and lifelike figure includes Lesnar's skull cap and the steel ring steps that became almost the third star of his match against Triple H at WrestleMania.  These steps fit onto the various rings that Mattel has released and even have the side "handles" used by the stars in brawls. 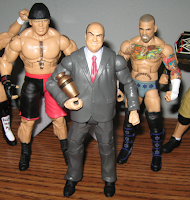 Heyman scores a few less points with me than Booker, but not too much.  It's a great figure of the "Walrus" complete with "mad scientist" scowl and ever-receding hairline.  A microphone would've been a fun accessory considering that the figures hand could hold one and it's the item that allows him to be one of the main reasons to watch Monday Night Raw.  In the spirit of WrestleMania, the urn can be positioned in Heyman's arms.  It should be noted that, like Rodriguez, Heyman will also be released outside of the Build-A-Figure series in the future.

There's also what could be described as an "unofficial official" bonus figure to this set.  Many who purchased these series were treated to the Toys "R" Us holiday exclusive Elite Triple H figure for free.  Though it can be purchased separately, this figure is free to consumers who spent over $30 on Mattel WWE items.  Seeing as that the figure is also based upon WrestleMania XXIX, it fits right in with the ten other figures shown here.  It is one of the very first figures of Helmsley to feature his new shorter hair style, and includes a cloth t-shirt and the same sturdy sledgehammer that was packaged with last year's exclusive of The Undertaker.  Jakks was never able to produce a proper looking sledge hammer thanks to the company using very bendable plastic on the accessory.  Mattel gets it right, and it looks perfect when placed into the hands of "The Game." 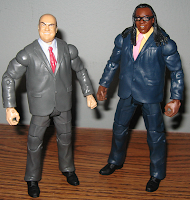 The Build-A-Figure collection continues to grow.  Although I'm not particularly happy that Rodriguez and Heyman will now be placed into regular lines, I doubt that we'll ever see Cole, Long, and Laurinaitis redone.  Recent announcements from Mattel suggest that we will be seeing Build-A-Figures of both Paul Bearer and Jim Ross.  Both will be welcome additions to the lineup.  My beloved WrestleMania XXIX will also live on in 2014, as my most long-awaited figure of the year, Zeb Colter, will be released under that banner in an upcoming WrestleMania Heritage series.  Welcome to a "Very Mattel Holiday Season!"
Posted by J\/\/ at 7:00 PM

Just in time for the kids xmas !

More Christmas gift ideas for the fan in everyone's life coming in a few weeks!

that photo with you and Hulk Hogan is great where did you meet him?

Thanks! That picture was from the TNA Lockdown 2012 Fanfest in Nashville. The Hulkster is always worth the trip!