The Shield Invades The Figure World 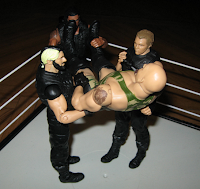 They don't sing.  They don't dance.  They don't wear colorful costumes.  They are The Shield.  Dean Ambrose, Seth Rollins, and Roman Reigns took WWE by storm around one year ago.  This holiday season, figures of this treacherous trio will invade collections around the world.  Their arrival marks the first time that any of the three have been available in figure form, so do their plastic counterparts live up to the hype?

All three make their arrival in the last of the white packaging that debuted a few years ago.  A blue and gold design will take over the line beginning with the next group of figures.  Ambrose is packaged as a single while Rollins and Reigns are sold as a Battle Pack.  Both figures are in series that also contain debuting female figures (Tamina Snuka and a Naomi & Cameron Battle Pack), so it's already evident that collectors will be on the hunt. 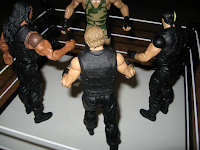 They aren't colorful or flashy in the ring, thus neither are these figures.  Each have their respective style of flak jacket/vest and gloves (or lack thereof).  There is no reuse of the vests, which are not part of the torsos but rather separate rubber pieces, and that is a definite plus towards Mattel.  Years ago, one vest torso piece would've been created for all three figures.  That is not the case here.  As he should be, Reigns is the tallest of the three. 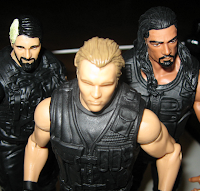 The facial scans are absolutely dead-on.  For those who are fans of the unique expressions of Ambrose, you will not be disappointed.  Reigns is easily distinguishable as the latest Anoai family member to hit WWE, being the son of Sika and brother of Rosey.  Rollins may be the best of them all and continues to remind me of a modern-day Al Perez as far as looks.  In an age where even scanning the stars themselves does not necessarily guarantee a perfect likeness, The Shield hits all of the marks.

Hot new characters coupled with the holiday shopping season can usually only equal one thing: headaches for collectors.  While this may be so for the female characters being introduced, most will rest easy with The Shield.  Unless you absolutely want the "rookie" figures of the group, there is a number of each character planned to be released in the coming months.  Ambrose and Rollins will see a Battle Pack of their own while each member will be released in Elite form as well.  K-Mart is also seeing an exclusive three-pack of the group.  Although the Elite style are sometimes a step up, I think that Basic figures are exactly what's needed for The Shield.  They just look solid and in many ways remind me of wrestling figures of the past. 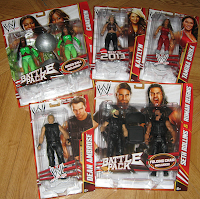 There's been a lot of Mattel product seen here on the blog lately and we haven't seen the end.  As hot and cold as I've been on some of the product and distribution over the years, the company shows why it's been in business as long as it has.  WWE products are in toy, department, discount, and drug stores and even show up in places that you previously may not have guessed.  If WWE is anything but ecstatic over their relationship with this manufacturer, they have some soul-searching to do.  Mattel is bringing it in a major way with no end in sight.
Posted by J\/\/ at 7:00 PM