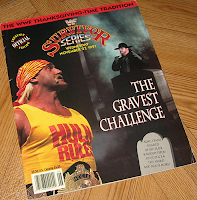 Next year at WrestleMania XXX it is very possible that The Undertaker will extend his undefeated streak at the event to 22-0.  Although I think it could still effectively be ended, the company seems intent on keeping the record going as far as they can.  While The Undertaker has to wait until 2014 for that accomplishment, another "22" appears for him this very month.  It was twenty-two years ago, on November 27, 1991, that The Undertaker captured his first WWF Championship.  The event was a very controversial fifth installment of the Survivor Series that up until then had only featured eight and ten-man tag team elimination matches.  The Undertaker was the first ever to challenge for any championship at that particular pay-per-view, and here he was up against "The Immortal" Hulk Hogan. 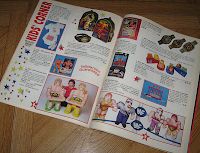 The program for the 1991 Survivor Series follows a trend that didn't last very long: using pages from the basic WWF event programs of the time to "beef up" the content inside.  There's nothing wrong with it, but it is different from other years.  Even the 1991 merchandise catalog is present.  Gone are the days of young Shane and Stephanie McMahon modeling the merchandise, and beginning to be included are items that were already available outside of the WWF directly such as Tonka's Wrestling Buddies.

As was the norm, each match got its own individual photos and write-up.  As noted above, this Survivor Series featured the first time that a championship was on the line at the event.  I did not watch the event live, but can still remember my shock to hear that The Undertaker was the WWF Champion.  Keep in mind, no one at the time would have ever expected The Undertaker to go as far as he did in the industry.  Even though the finish was "screwy" and a set up for the WWF's experimental "Tuesday In Texas" pay-per-view the following week, The Undertaker as champion just didn't click with me. 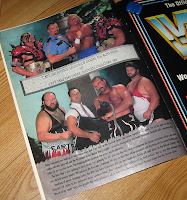 As with most of the early Survivor Series events, substitutions were made for certain team members as the weeks went on.  In 1991, there were storyline excuses for some of the changes.  The first six-man tag team elimination match took place this year, although it is not reflected in the program.  Sid Justice, who was legitimately injured, and Jake Roberts, who had attacked Randy Savage with his cobra, were pulled from their respective teams with no replacements made.  The latter angle enabled Savage to be "reinstated" following his retirement at WrestleMania VII in order to avenge his wife Elizabeth from the terrorizing antics of Roberts.  It always struck me a bit odd that Roberts was going to have Earthquake, who had "squashed" Damien just a few months earlier, on his team, but I guess "baddies" stick together...

The opening match of the night featured an amazing bevy of talent in one ring pitting Ric Flair, Ted DiBiase, The Mountie, and The Warlord against Roddy Piper, Bret Hart, Davey Boy Smith, and...well...Virgil.  Seven out of eight isn't bad at all!  Despite the talent, the ending of the match kicked off what would be a night of odd endings and happenings.  Everyone remaining is disqualified or counted out or...whatever...for brawling and therefore Flair, the legal man in the ring who remained in the ring during the melee, is the sole survivor. 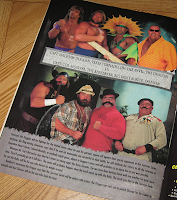 Another match full of replacements was the mid and undercarder battle that was set to include The Dragon, Texas Tornado, Hacksaw Jim Duggan, and Jim Neidhart against The Berzerker, Skinner, Big Bully Busick, and Colonel Mustafa.  Ricky Steamboat, in his brief 1991 run that produced more merchandise than memorable matches, left before the event and was replaced by the newly minted "El Matador," Tito Santana.  Neidhart was injured in an angle and replaced by Sgt. Slaughter, while Busick, who had also departed the company, was replaced by Hercules. 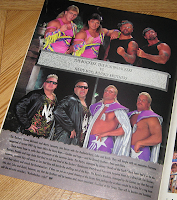 In yet another match that was ultimately forgettable, The Rockers and The Bushwhackers teamed to battle The Nasty Boys and The Beverly Brothers.  Gone were the days of the impressive twenty-man tags featuring all of the tag teams that the WWF could scrounge up.  Instead, we're left with a match that really only served to further the break-up of The Rockers. Including the then-WWF Tag Team Champions The Legion of Doom in this match would've probably been made it a bit more interesting.

The program ends with the "Keep An Eye On" feature that concluded the regular WWF programs of the time.  Savage is the only name featured that did much of note in the months following the publication.  And of course, no program of the era would be complete without an ad and order information for the Survivor Series 1991 Coliseum Video.

Though I'm usually partial to anything from this era or before, the fifth annual Survivor Series has never been one of my favorites.  Nearly everything is geared towards urging the viewer to purchase "Tuesday In Texas" the following Tuesday, and the content that isn't is ignored for more shameless promotion.  It was an experiment on many levels, and one that the consumer public didn't care for.  The following year, the event would take yet another turn and leave but one "traditional" Survivor Series match on the card.  The use of those matches has varied in years since, but with the deep WWE roster of today, there's certainly plenty of room to make a full elimination match card once again.  If you ask me...it's best for business.
Posted by J\/\/ at 7:00 PM

Great read. Much better than the article wwe.com has on Survivor Series.

When I stumbled on to your blog I think I died and went to heaven. Im a huge wrestling fan especially 80s-90s
If you get time check out my blog robbiegoeasyonthepepsi.blogspot.ca . Its new but ill be posting alot of wrestling related stuff

Glad you're enjoying it! Will check yours out as well. Thanks!