Georgia Championship Wrestling...34 Years Ago To The Day Often we look back on the events in wrestling's past that will never be forgotten.  The WrestleMania's, the Starrcade's, and Monday Night Raw's that will linger in the back of our minds as long as we're fans.  But what about the forgotten shows?  The shows that, for decades and decades, could be found somewhere in the world on any given night of the week.  No record of these shows may exist aside from a card rundown, results, or sometimes even less, but these are the events that kept the business going.  Before the advent of supercards and pay-per-view, these shows were where the money was made, as were the memories.

One of those very shows took place thirty-four years from the date of the publication of this article.  It was a Georgia Championship Wrestling card in Athens, GA on Thursday night, July 17, 1980.  The cover of the program at the time, the weekly Ringsider (Vol. 80 No. 14, to be exact) featured Ole Anderson in a familiar pose.  The gruff grappler is shown on the set of the Georgia Championship Wrestling television program, making a heated point as he is interviewed by Gordon Solie.

Inside on the first page we are treated to photos and a listing of the then-current champions.  Harley Race was the (NWA) World Heavyweight Champion, while Ivan Koloff and Alexis Smirnoff held the Georgia Tag Team Championship, Tommy Rich was the National TV Champion, and Austin Idol was the Georgia Heavyweight Champion.  Promoter Paul Jones, a man often confused '60s-'80s star wrestler and manager of the same name, is pictured as is Freddie Miller.  Known for his "Beeeeee There!" catchphrase when promoting local cards on television, Miller was also the editor of The Ringsider.

A separate piece of paper is included with the rundown of the night's card.  Fans in Athens were scheduled to be treated to The Assassins versus Ole & Lars Anderson, Bob Sweetan versus Mike George, Tony Atlas versus Dennis Condrey, and Jay Strongbow versus Eddie Mansfield.  In addition to the classic NWA Wrestling logo, a special greeting is included at the bottom.  It seems that the W.F.I.A. (Wrestling Fans International Association) was in Atlanta with their annual convention at the same time that this show was held.  There is no doubt that many W.F.I.A. members attended this card.  Anyone who wanted to be as "inside" to the wrestling business as you could be at the time was a member of that organization.  Even Juanita "Sapphire" Wright belonged to the club!

Next in the program is a full-page ad where Dusty Rhodes declares that he, indeed, "can tell you about pain."  It seems that "The American Dream" was a spokesperson for Stanback Powders at the time.  Grab a boxtop, $4.95, and this filled-out coupon and you would receive a shirt just like the one that Big Dust is shown wearing.  While the shirts are assuredly long gone, a quick Google search shows that this brand of headache powders does in fact still exist.  If only Dusty's magical fro still existed, too.  Nevertheless, this is a great example of the connection with the fans that "The American Dream" had throughout his career.

The next two pages are full shots of Tommy Rich and Austin Idol, the TV and Georgia Champions, respectively.  Rich was less than a year away from the brief peak of his career when he took the NWA World Heavyweight Championship from Harley Race.  Idol would go on to make his mark in several wrestling territories, including Memphis, but never seemed to attain the level of fame and success that his talent deserved.  Looking at both men today, they certainly seem to have lived different lifestyles.  Idol looks almost identical as he did in his wrestling days, while Rich is almost unrecognizable. 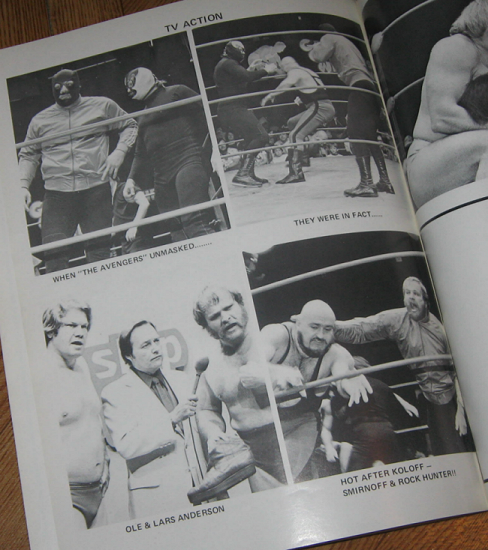 Our next page is a recap of some recent tv action.  In this case, it seems that a tag team known as "The Avengers" recently appeared on the Georgia Championship Wrestling scene.  I wonder how many fans knew that these two masked bulks were actually Ole and Lars Anderson.  Apparently they unmasked in a scuffle with Koloff, Smirnoff, and manager Rock Hunter.  I guarantee that Ole's often commanding promos convinced many a fan into buying a ticket to see this feud play out.

On the last inside page, we have a half-page action shot of two men who would go on to much greater fame.  "The Boston Battler" Kevin Sullivan has Tenru in a chinlock.  The young Asian star is better known as "Tenryu" and became a legend in Japan in addition to being a well-known name here in the United States.  The second half of the page is an ad for rentals at Grove Park Apartments.  For just $125 per month, fans of GCW could rent an apartment right on 1401 Bankhead Highway, named for U.S. Senator John H. Bankhead, grandfather of the outrageous actress Tallulah Bankhead.  Apartments are still located at the address, but they no longer bear the same name nor the same low monthly rate. 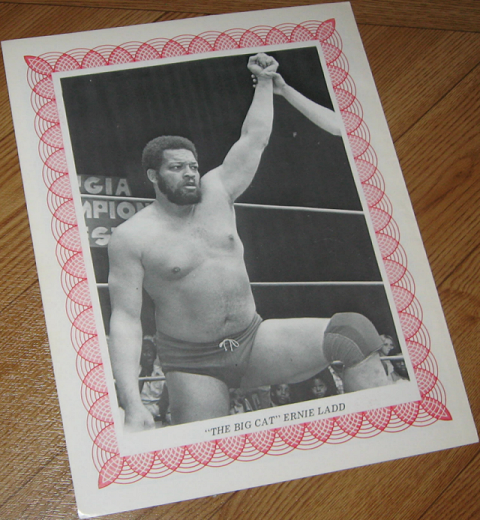 We end the program with a great shot of "The Big Cat" Ernie Ladd.  Ladd would begin to wrap up his career in the 1980's, and by the middle of the decade was working behind the scenes with the WWF.  So what happened at the matches that night?  Strongbow defeated Mansfield, Atlas defeated Condrey, Sweetan defeated Mike Sharpe, and The Assassins defeated The Anderson's.  Whether or not it was actually Mike Sharpe as listed in the results or Mike George as listed on the card may forever be up in the air.  Both men were active in the territory at the time.  The results were obtained from GeorgiaWrestlingHistory.com, an invaluable tool for any fan of territorial wrestling.

I would imagine that like with many of these shows, a good time was had by all that night.  It was a time when wrestling truly was wrestling.  The stereotype of smoke-filled armories come to life.  Pro wrestling will never be like that again.  It's a different business in a different time.  But shows like these will always be the roots of the modern-day product.  In the end, it's about entering a different world for a couple of hours and letting the in-ring action take over.  That's something that, no matter the era, the industry will always provide.
Posted by J\/\/ at 7:00 PM