Although I've always had a problem choosing my all-time favorite singles wrestler (I've narrowed it down to five), tag teams have been much easier.  When asked, I've never thought twice about it, Demolition is my favorite tag team of all-time.  Some have labeled them as Road Warrior ripoffs, but it really isn't true at all.  While they may have been created so that the WWF could have a tag team with menacing facepaint and attire, that's really where it begins and ends.  Even with the "cartoonish" design of the WWF at the time, Demolition came off to me as much more believable than their "invincible" counterparts.

Ax and Smash could have some great matches with a variety of opponents.  They had power though they did not rely on it, instead being able to change their style to combat teams as diverse as The Rockers, The Powers of Pain, and The Hart Foundation.  They also did not overstay their welcome.  Although the final year was not nearly as strong as the first three, it did introduce a new member into the group, Crush.

Although Crush had other looks in his career still using the same name, many remember him from this first incarnation.  In between WWF stints, Crush returned to his home territory of Portland and continued to wear the Demolition gear.  There is also a story that Crush appeared at ringside in his Demolition garb in late 1993 around the time that he turned on Randy Savage.  While no photographic proof of this has surfaced, it's not that far of a stretch to believe that this happened while his similar "heel" design was being finalized.

Mattel has decided to include Demolition Crush in their Elite Flashback series.  Ax and Smash appeared years ago in Mattel's late Legends series.  Despite them being my favorite tag team, I was less than enamored with the final product.  Ax and Smash just seemed too slight and small for two men who were always bulky.  This was during the early days of the WWE-Mattel relationship when the toy company was providing underwhelming likenesses for larger-than-life characters.

Crush is an immediate improvement with the new Mattel Elite packaging alone.  He fills the window box well, as he should being the tallest Demolition member.  Included are the removable mask, vest, and arm gauntlets that were also included with Ax and Smash.  I have seen Ax's original vest in person and the one included here is an exactly replica.  The mask and gauntlets are very spot on as well.

The figure itself is good and tall, but the bulk suffers as it does with the earlier two members.  Crush just looks too thin to me.  These men were monsters.  One nice touch across the board on all three is that the torso joint pleasantly blends in behind the leather straps that were a Demolition trademark.  Those straps are done as a separate piece which is a nice touch when they could easily have been painted on. 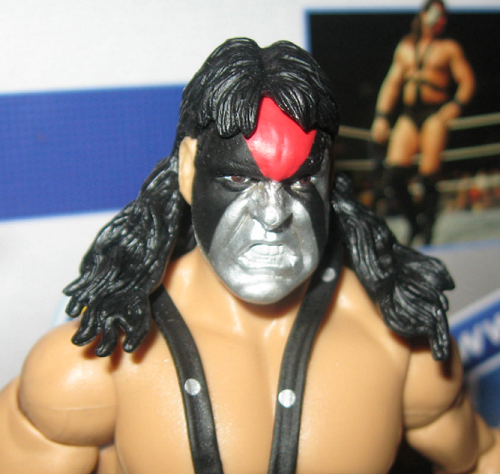 As far as facial likeness, the paint is spot on.  The flowing black hair is also here.  What isn't here is the face of Brian Adams.  What I'm seeing is the Crush makeup on a rather generic face.  I also felt that the Mattel Smash suffered from this oversight as well.  It's not a complete killer, but it's the kind of thing that prevents a figure from being great.  At least the scowl looks like Crush, but I'm just not seeing Adams, whose likeness has been captured rather closely in the past.

Someone wanting to complete the Mattel Demolition tag team trio or the Legends/Flashbacks in general will want Crush.  In my opinion, even being the Demolition fan that I am, Mattel would've done better with a colorful "Kona" Crush figure.  For as brief as that run was, something with that character resonated with the young fans of the era to where it is the fondest remembered of Crush's personas.

Mattel has obviously found success by releasing Legends in the Flashback spot.  Andre the Giant, Lex Luger, and the Road Warriors are coming and while I know that we'll never get the depth that came with Jakks Classic Superstars line, Crush gives me hope that we'll get more figures of the lesser done names.  Now, if we can only get that Magnum T.A. released...
Posted by J\/\/ at 7:00 PM