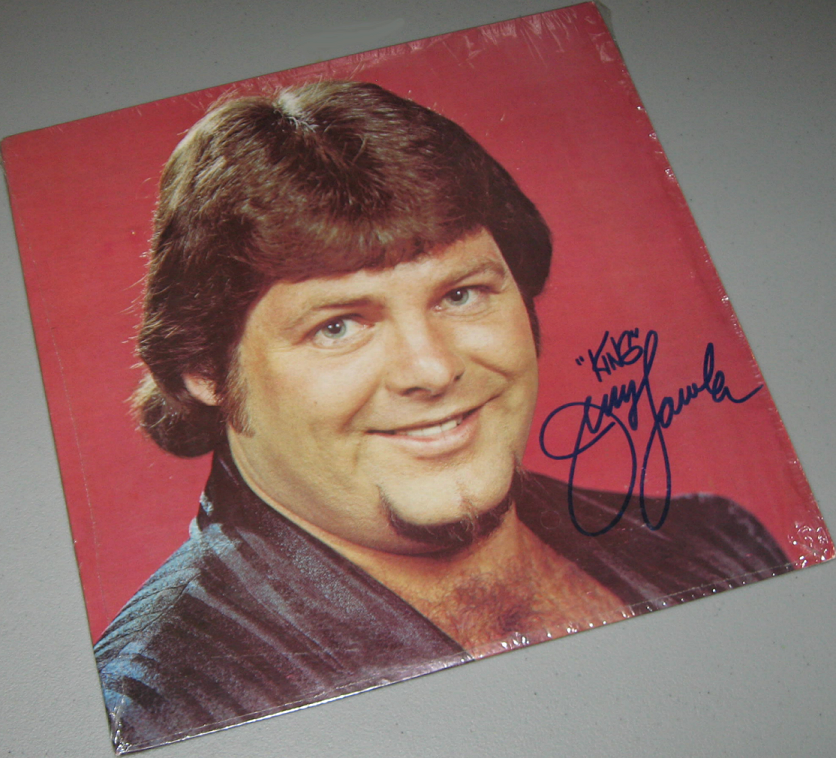 It is hard to believe that the last time that Jerry "The King" Lawler was the focal point of an entry on this blog was nearly two years ago.  I had decided to reflect on him after his heart attack which occurred live during a broadcast of Monday Night Raw.  Much to the relief of many, "The King" survived.  Although he was very lucky to be where he was at the time of his emergency, which included nearly instantaneous medical assistance, Lawler has always been full of life.  A continuously successful career in pro wrestling for over four decades almost requires that kind of attitude, as well as the ability to adapt. 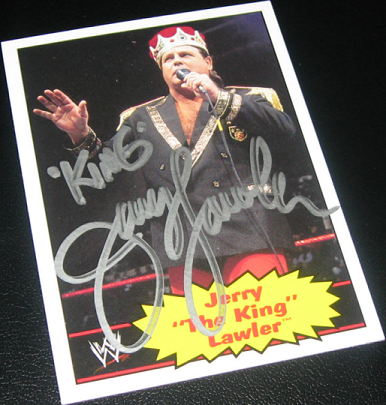 Some would point to Lawler's home wrestling territory of Memphis as almost an early view at what would later become "sports entertainment."  Crazy characters and even crazier situations would often find their way onto Memphis television and into the Mid-South Coliseum on Monday nights.  Lawler was frequently at the center of this madness, which probably helped him call some of the wacky Monday Night Raw antics so many years later.  "The King" was known for verbalizing some of the all-time great wrestling promos while feuding with the likes of Terry Funk, Randy Savage, and Andy Kaufman, but how about harmonizing?

Yes indeed, Jerry Lawler sang, or as his first LP was titled, "Jerry Lawler Sings."  Lawler produced two albums and about a dozen singles, but "Sings" was his first.  He wasn't the only Memphis wrestling star to be involved with music, keeping company with Jimmy Valiant, Sputnik Monroe, and of course Jimmy Hart.  I guess the pull of Nashville and Memphis' own music history was too much to resist. 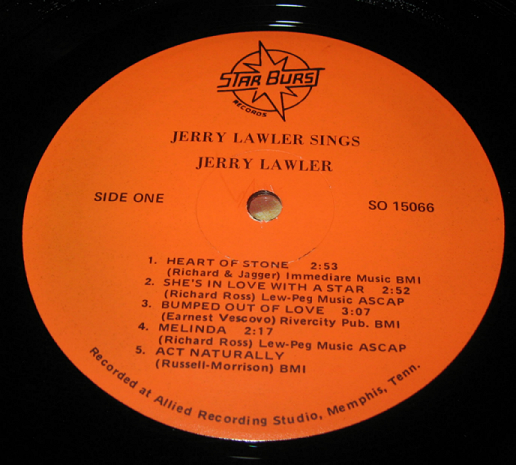 Produced by Star Burst Records and recorded at Allied Recording Studio in Memphis, Lawler belted out ten tracks including covers of The Rolling Stones' "Heart of Stone," Buck Owen's "Act Naturally," Van Morrison's "Brown Eyed Girl," Dr. Hook's "The Millionaire," and the Waylon Jennings/Willie Nelson collaboration "Good Hearted Woman."  The other five songs include "She's In Love With A Star," "Melinda," "If We Don't Make It Better," and "Happy Go Lucky" penned by Richard Ross and "Bumped Out of Love" penned by Earnest Vescovo. 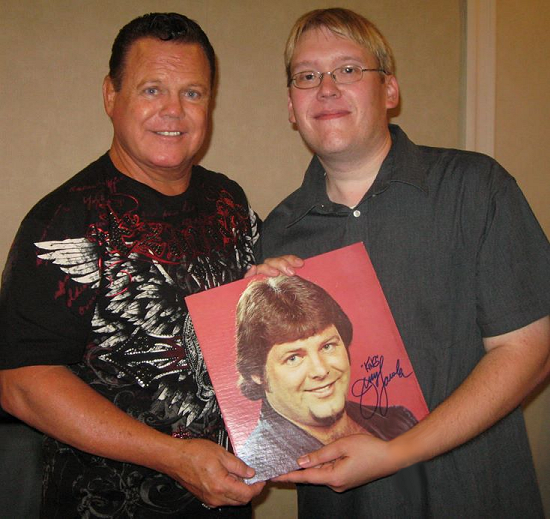 If the cover art looks familiar, it's because Lawler held a copy up at his 2007 WWE Hall of Fame induction.  He also held up the record put out by the man who inducted him that night, William Shatner, and made a few jokes about both efforts.  Recently I was able to have a copy signed by Lawler himself.  He was absolutely stunned to see it and said that even he no longer owned a copy.  I asked what had happened to the copy from the Hall of Fame, and he said that it disappeared after the event.  To the amusement of "The King," I joked that Shatner took it home with him. 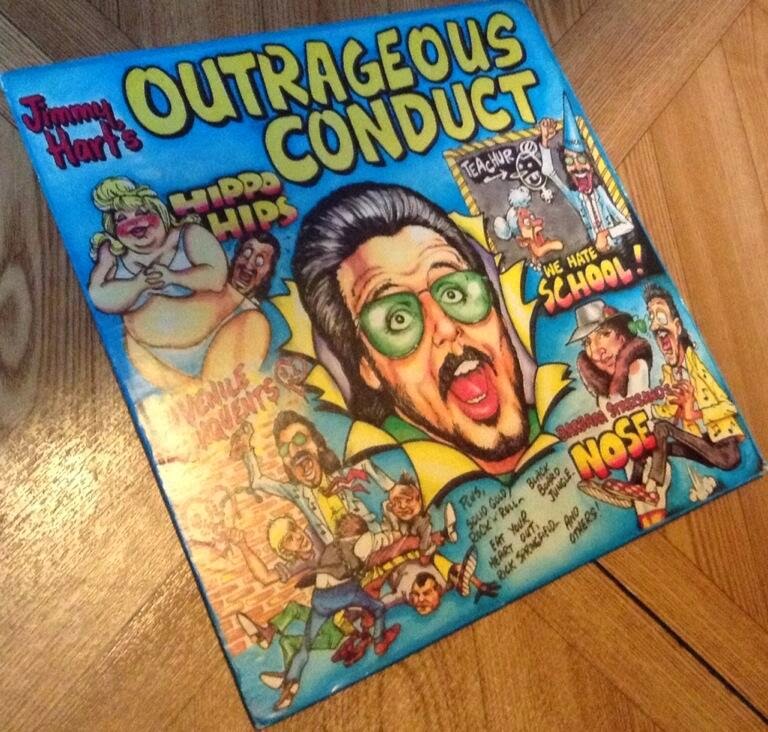 Lawler signed it with his amazing signature that is among my favorites of any wrestler, and had a question for me, "Do you still have a record player?"  I do, and told him that I own many of the wrestling records, including Jimmy Hart's "Outrageous Conduct" albums.  He pointed out that he created the cover art on the original release, which indeed was another musical entry from Memphis wrestling that was later re-released during Hart's WWF tenure. 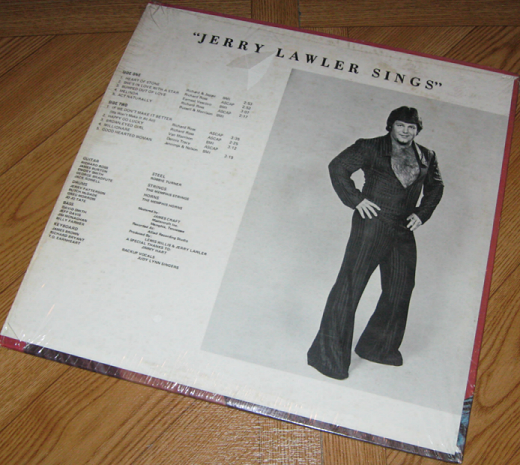 Have I listened to it?  Well, no.  "The King" was amazed that the vinyl looked untouched.  Who wants to scratch up wrestling history?  Some of Lawler's music efforts can be found online, and while his self-depreciating humor regarding his musical career may be valid, you have to give credit to anyone who puts themselves out there in such a manner.  That's just another reason why he always will indeed be, "The King."
Posted by J\/\/ at 7:00 PM