The Greatest Wrestling Extravaganza of All Time 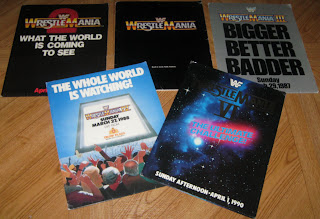 That sentence doesn't have the same feeling of grandeur it once did for many fans, but no one can argue that it still is the biggest event of its kind, and the most recognized for that matter.

How did it get so big? Say what you want about him, Vince McMahon knew what he was doing. He took an oft-talked about gamble, and it paid off. But to take that gamble, he had to know he had something big. He did. He built it up to BE big. Nonstop promotion on his television programming. Television and radio spots. And print...

A lot like major motion pictures, the WWF put out press kits heralding the arrival of WrestleMania. It's unknown how many of these survived, and they're very overlooked wrestling collectibles.

Shown above are the kits from the first WrestleMania, as well as from 2, III, IV, and VI. Kits exist from V and XIV as well, and possibly more. As I said, they're overlooked AND underdiscussed. That's why I'm here.

Even with the first one, the folders that create the "shell" of these kits are glossy and printed on heavy stock. The first is put out by Bozell & Jacobs Public Relations of New York City, while the next two were put out by Wishner Communications. As the years go by, any mention of a PR and/or advertising/marketing firm are gone, and the WWF takes sole responsibility for their product. A sign of the company getting bigger and bigger.

While it would be all but impossible to 100% confirm what was included total in these kits, some include the WrestleMania program magazines (discussed in an entry of this blog last year), others include 8x10 promotional glossies, but all contain the "hand-typed" style press releases you would expect in a press kit. 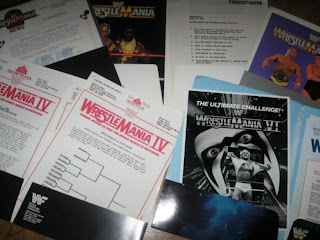 To the collector who is just interested in the more visual aspects of merchandise, these kits wouldn't really fit into your collection. To those, like myself, who love the "behind the scenes" items that your average fan wouldn't have had access to, these are a total treat. Even friends of mine who are fans but not collectors were blown away by these. They tell the story of the growth of WrestleMania without the need of a book, newsletter, or historian. They show the evolution of how, at one point, a full history of the WWF Heavyweight Championship could be told on one typed page. They explain just how important closed-circuit television was to the early days of 'Mania. They ARE the history of the event which helped take a regional wrestling promotional and turn it into a worldwide, multi-million dollar empire.

Say what you want about the WWE...but this is how they grew.

Awesome kits you have there! I totally appreciate the behind the scenes, rare items like these. Fantastic stuff.

Can you recommend any websites that deal in rare wrestling collectibles and event used memorabilia? Ive searched all over ebay but only see a limited amount. Ive googled around like crazy but haven't found too much.

There actually isn't a single one that I've been able to find.

eBay has pretty much been my sole source at least in the last few years, and you really have to search.

Occasionally I'll find something at a convention, but these days the only merchandise you can usually find at those are dvds and Classic figures...which is the vendors usually go home with what they bring.

Glad you enjoyed the entry!

Hello I saw your WWF Press Kits, Would you be interested in selling the Wrestlemania IV one? Please let me know. Thank you. My email is jonathan.insero1180@gmail.com

No, nothing on the blog is for sale.